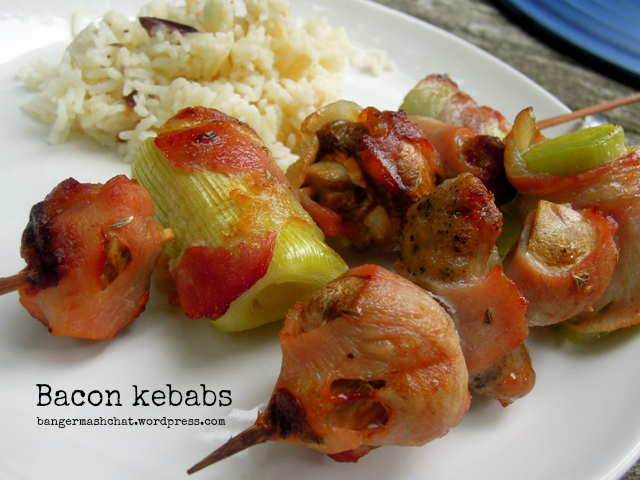 This was a truly random recipe choice. I counted along my cook books, from left to right, until I reached the magic number 30. The title I landed upon was a tiny little book crammed in between a couple of heavy weights, The Silver Spoon and How to be a Domestic Goddess.  My random book was GoodFood: 101 Cheap Eats; not the most exciting or inspiring perhaps of all the books on my shelf, but there you go. That’s the point I guess when it comes to picking a random recipe.

The next direction was to turn to page 30, which I dutifully did. And the recipe in question was for Bacon Kebabs on Mushroom Rice. Not bad, I thought, although my daughter Jessie won’t be thrilled. The face she pulls if you suggest she eats a mushroom couldn’t be worse if you’d suggested she eat something you’d discovered on the bottom of your shoe.

So why the random recipe choice? Many of you will no doubt already be familiar with Dom at Belleau Kitchen’s Random Recipe challenge, which this month celebrates the big three-oh. 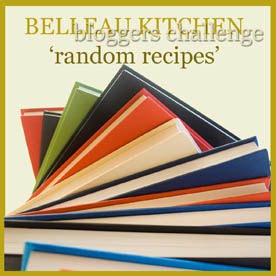 I thought it was about time I entered a dish. I’ve meaning to so for about the last year. All too often I’ve got as far as selecting my random recipe and then completely forgetting to make it before I realise the deadline has already been and gone. The story of my life really! But this month I’ve done it. Only just mind – July’s challenge closes in just over an hour. If I type quickly, I think I’ll just make it!

While the Bacon Kebabs might not have been the classiest or most challenging of dishes, they did give us a good plate of decent grub which went down very well with all the family – with certain members avoiding coming into close proximity with anything remotely resembling a fungus, obviously. It’s not a recipe I’d necessarily have picked out myself to make, but it’s a simple one I can see myself doing time and time again, and one I might possibly prepare the night before for a lazy Sunday brunch when we’ve got people staying the weekend. 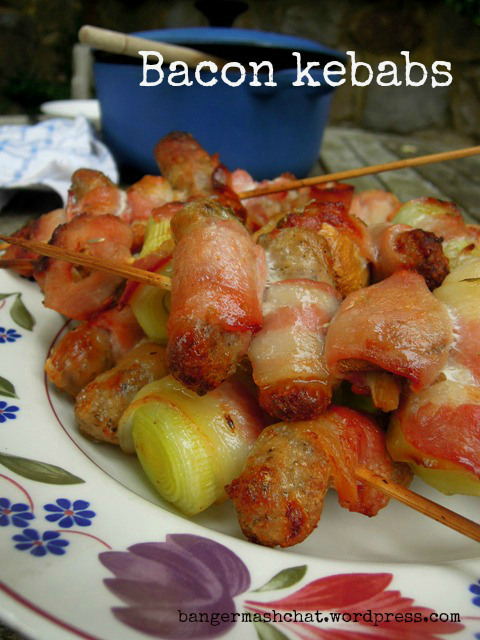 Blanch the leeks in boiling water for 4 minutes.

Finely chop one of the mushrooms and the stems of the others and keep to one side to add to the rice later. (As my oldest despises mushrooms, I chopped up half an aubergine instead.)

Cut the remaining mushrooms into quarters.

Stretch out the bacon with the back of a knife and wrap around each piece of leek, mushroom and sausage. Carefully thread onto skewers. I made sure, of course, that a few of the skewers were free of the “evil” mushroom.

Cook the rice according to the packet instructions.

Melt half the butter with half the dried thyme and lemon juice, and then brush over the kebabs. Grill under a high heat for around 15 to 20 minutes, turning regularly until cooked.

Melt the rest of the butter in a pan and cooked the chopped mushroom (or in my case, chopped aubergine) with the remaining thyme until softened. Add the creme fraiche, season and stir well.

Drain the rice and stir into the sauce.

Stir the kebab pan juices into the rice and serve immediately. 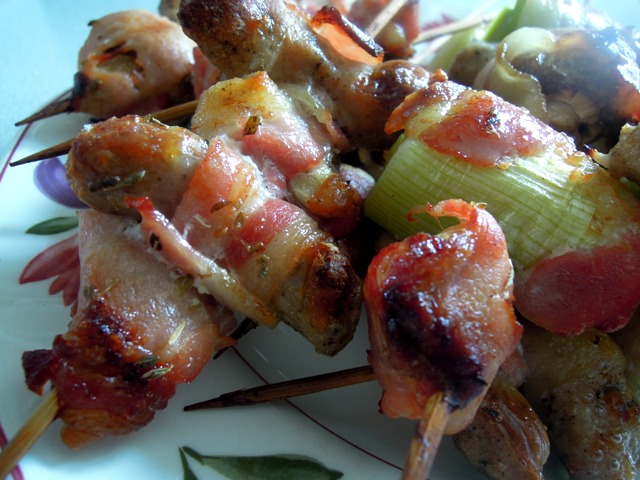 And as this is such a cheap and cheerful dish, I’m also entering these yummy Bacon Kebabs into July’s Credit Crunch Munch from Fuss Free Flavours and Fab Food 4 All, which is being brilliantly hosted this month by Sian at Fishfingers For Tea.

If you’re a regular reader of this blog, you’ll know I’ve only discovered my cooking mojo in the last few years. I spent a long time feeling out-0f-place in the kitchen. But I do believe I’ve arrived and earned my right to wear a pinny (although I generally forget to until it’s too late). Don’t get me wrong, I’ll never be a great cook and I won’t be entering Masterchef anytime soon, but I think I might be turning into a good cook. Indeed, in a restaurant the other evening, my husband told me he thought my cooking was better. I was ever so slightly on the chuffed side.

Omelettes were always one of those dishes I had trouble with. Well, rather I assumed I would if I actually plucked up the courage to try making one. Yes I know they’re quick and simple, but only if you’re a proper cook. Or so I thought. In recent months, I’ve made myself learn how to make a good omelette because I realise they are the ultimate fast food. After one or two duds along the way, I’ve worked out they’re not all that difficult after all. It’s all about trial and error and not being afraid to make a few mistakes. If you don’t make mistakes, how can you find out what works and what doesn’t?

We now eat a fair few omelettes in our house. Our life can get pretty manic, what with school and work and all the various out-of-school clubs and activities, not to mention some attempt at a social life; so it’s good to have a speedy and adaptable supper up your sleeve. They also make the perfect brunch dish, when you fancy something warm and tasty but don’t want to go to too much effort.

Now that I’m turning into a bit of an omelette fanatic, I was rather pleased when Littlewoods sent me a set of Russell Hobbs pans to test out – a frying pan and an omelette pan*. After many years, the non-stick coating on our old pan had given up the ghost, and omelettes aren’t so great when you don’t have a non-stick pan. At just £27 for the pair, they do seem a bit of a bargain. At first, when the pans arrived, I thought they were a little on the lightweight side, but having used them a few times now, I can confirm they are pretty decent pans. How long they’ll remain non-stick with the amount of wear and tear they’ll get in my kitchen remains to be seen, but for now they certainly turn out a good omelette.

I enjoy trying out new fillings for my omelettes. This latest concoction was simply a way of using up a few bits and bobs in the fridge. It worked out rather well so I think I’ll be adding it to my tried-and-test list.

Courgette and mushroom omelette with garlic and parsley

Heat a glug of olive oil in a frying pan over a medium heat and gently fry the courgette until softened. Throw in the mushrooms and soften these too before adding in the garlic and parsley. When the garlic is golden, take off the heat and keep warm to one side.

In your omelette pan, heat another glug of olive oil with the knob of butter over a fairly high heat. Pour in the beaten egg and leave for a few seconds to give it time to ‘catch’.

Then using an implement that won’t scratch your lovely non-stick pan (my weapon of choice is a rubber spatula!), start dragging the edges of the eggy mixture into the middle, going round and round, and letting the runny egg fill in the gaps you are leaving. As the omelette starts to firm up, tilt the pan to encourage the uncooked egg to flow into the spaces.

When the only runny egg left is on the surface, leave it for 30 seconds or so to continue cooking, and then it’s time to add your filling.

Pour the mushroom and courgette mixture over one half of the omelette and carefully fold over the other half. Cut in half and slide out onto warmed plates. Enjoy!

As a good omelette is a perfect lazy brunch dish, I’m entering this recipe into December’s Breakfast Club, a blogger challenge created by Fuss Free Flavours and which this month is being hosted by – oh yes, it’s me! If you’d like to enter a dish you can find out more here.

And because it features lots of lovely fresh parsley, I’m also linking up with Herbs on Saturday hosted by Lavender & Lovage.
* Disclosure: I was provided with two complimentary Russell Hobbs pans for review purposes and no money exchanged hands. 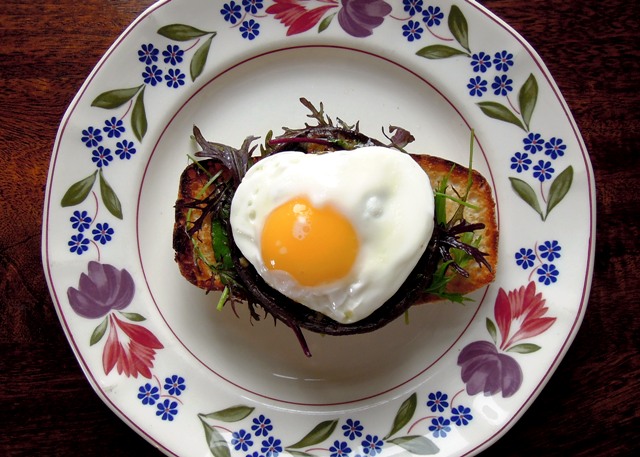 Here’s an easy way to put a smile on Dad’s face this Father’s Day (Sunday 17 June in the UK). Toasted ciabatta topped with a portobello mushroom baked in garlic butter and a heart-shaped fried egg. The perfect way to start the day; after a lie-in and a cup of tea in bed, of course.

To make the garlic butter simply crush a clove of garlic and mash into a decent knob of butter. Add some chopped, fresh parsley if you happen to have some. Smother this onto a portobello mushroom and bake in a hot oven for 15 minutes.

Cut a ciabatta roll in half and toast.

Place a handful of salad leaves in a bowl and toss with a little vinaigrette.

Fry an egg just how Dad likes it – sunny side up or over easy. I cooked mine in a cute heart-shaped frying pan or you could fry your egg as normal and then cut it out with a heart-shaped pasty cutter.

To assemble, simply place the ciabatta on a plate and cover with some dressed leaves. Carefully place the mushroom on top of the leaves and spoon over some more of the gorgeous garlic butter.

Finally, place the fried egg on top and serve, along with a copy of the Sunday papers. Enjoy!