I knew when we announced the three ingredients for May’s Recipes for Life it would prove a popular month for the challenge, and I wasn’t wrong. Faced with a trio of rhubarb, lemon and spice, food bloggers demonstrated just how creative they can be in the kitchen, concocting both sweet and savoury dishes from fools and muffins, ice creams and sorbets to curry and cous cous and even spaghetti! 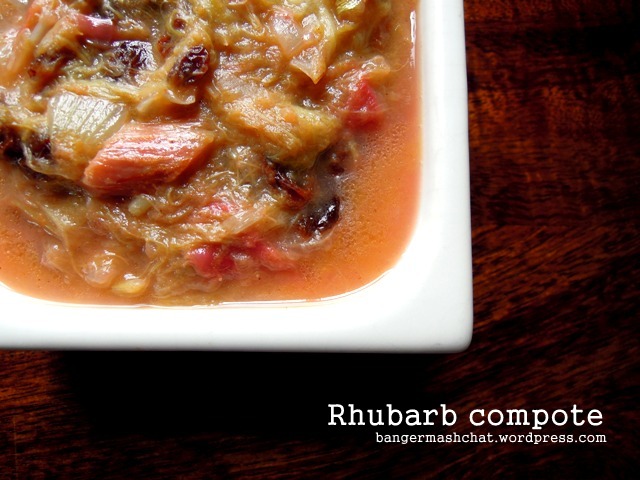 I got the rhubarb party started with a simple Rhubarb Compote. It’s very good as an accompaniment to roast duck, pork or lamb, and if you make a little too much, use up the rest in a big thick cheese sandwich. My compote is flavoured with ginger and mixed spice, but you could go with whichever spices take your fancy really. 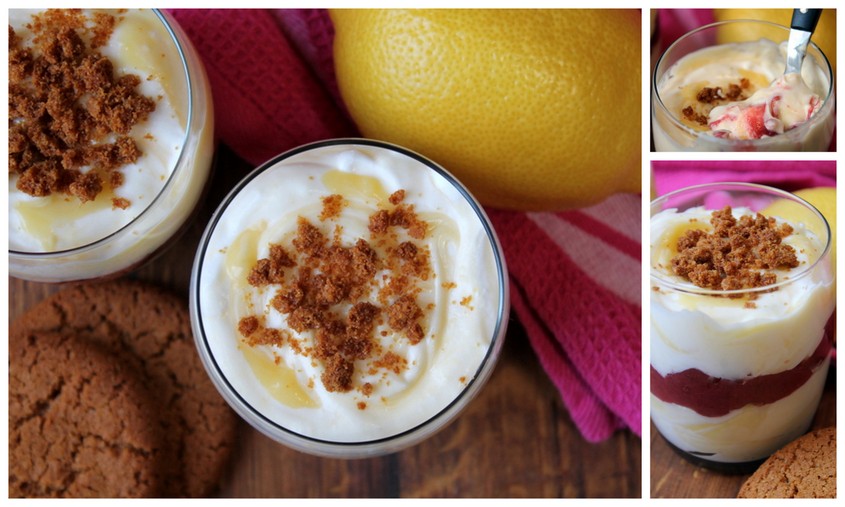 I love a good fool and this Rhubarb, Ginger and Lemon Fool from Claire at Under The Blue Gum Tree looks especially good, don’t you agree? Tracking down fresh rhubarb in South Africa proved something of a challenge but I admire Claire’s dedication to the cause as she succeeded eventually in finding “a few gnarly sticks” at her local grocers which she was able to transform into this delectable entry. 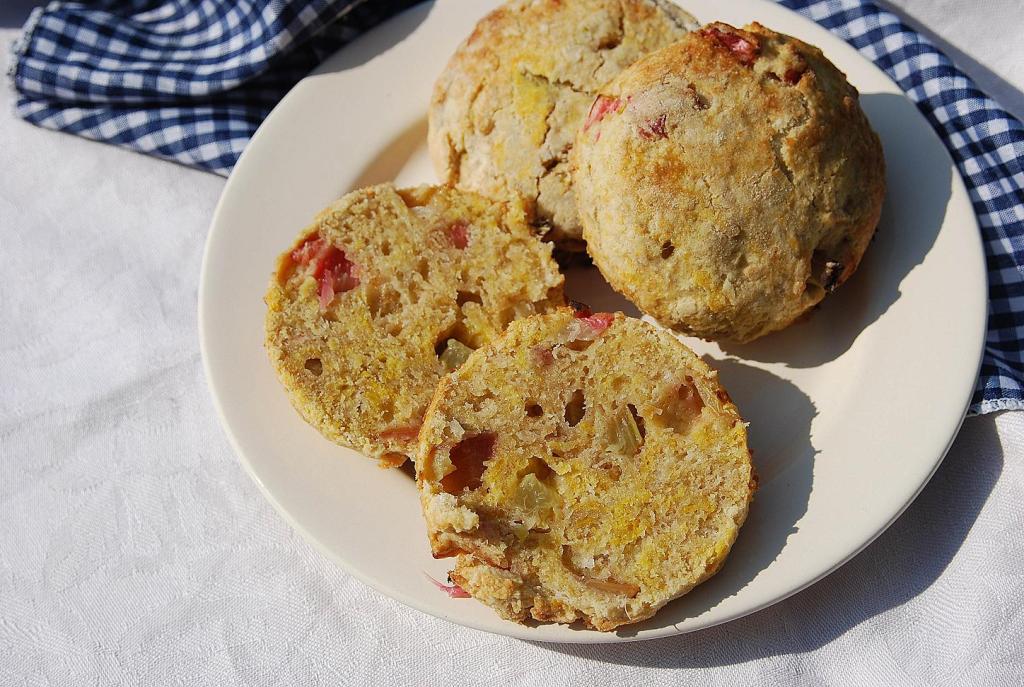 Next comes the turn of Sarah at The Garden Deli who brings us these Rhubarb and Lemon Scones as a tempting teatime treat. They sound incredibly easy to make, which is always a bonus in my eyes, and I can just imagine they’d be perfect served straight from the oven with some butter and jam. I’m making myself hungry just writing this… 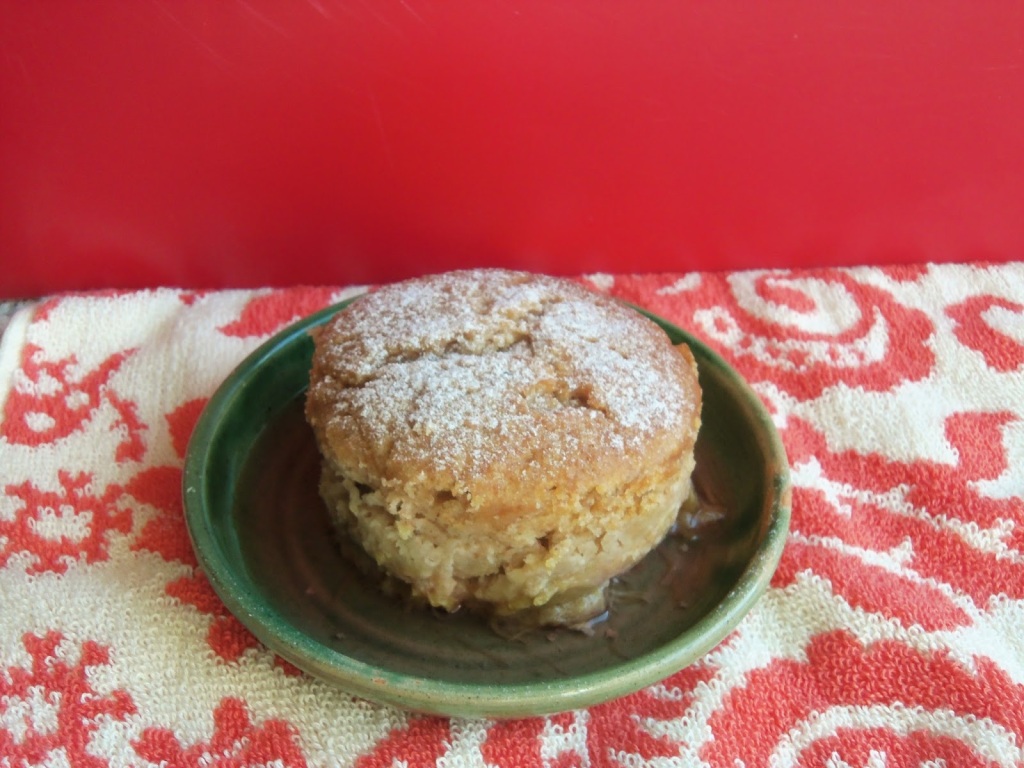 I’ve discovered that rhubarb infused with star anise is one of my favourite flavour combinations of all time, which is exactly the combination brought to us by Fun as a Gran with her Rhubarb, Lemon and a Spice entry. It looks a great pudding for anyone watching their sugar intake, as both the sponge cake and stewed rhubarb are made using agave sugar. 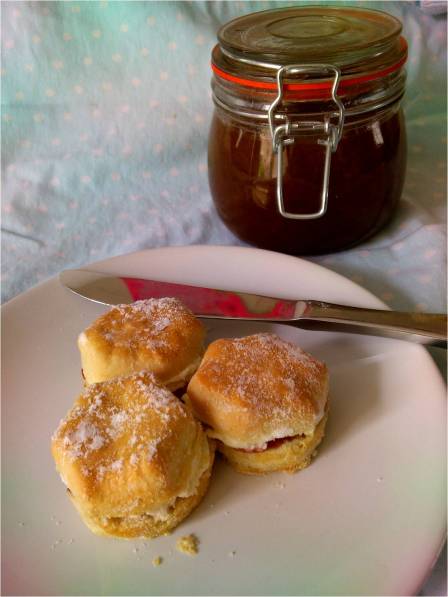 Michelle at Utterly Scrummy Food for Families made the most of the glut of rhubarb on her allotment by whipping up a big batch of this utterly scrummy Rhubarb and Vanilla Jam. I’ve never tried making jam with rhubarb before and so didn’t realise that it is rather low in pectin, which is what generally helps jam to set. I was interested to hear that Michelle uses lemon juice and the pips in a muslin bag to increase the pectin levels. I’m storing that tip away for future reference… 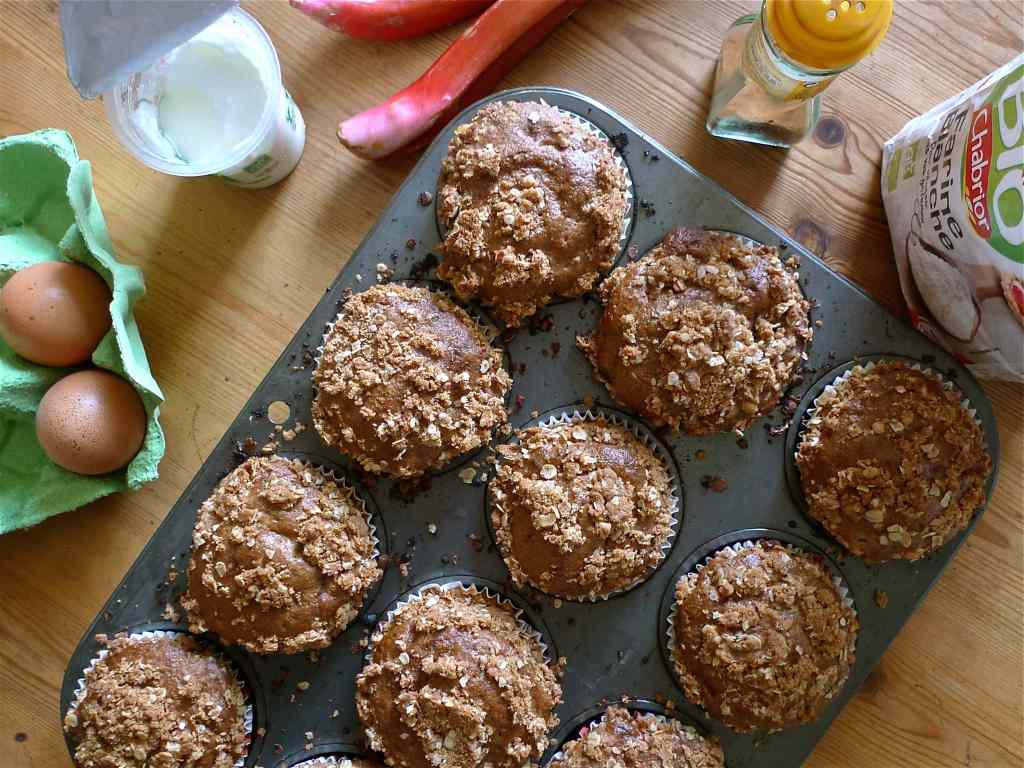 I’d considered attempting some Rhubarb Crumble Muffins myself but when I saw these beauties from Chez Foti I knew mine would never be able to compete. Don’t they look so good and sweetly satisfying? And they’d be just as good for breakfast as they would at teatime or as an after-school snack. Yes, I can imagine munching one or two of these at just about any time of day! 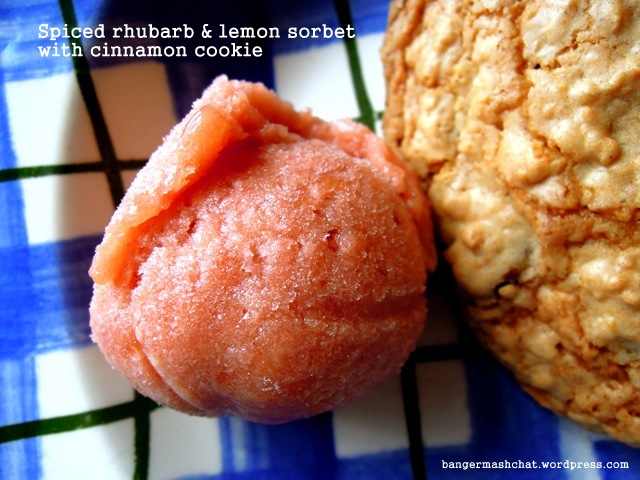 So instead of making muffins, I came up with Spiced Rhubarb and Lemon Sorbet with Cinnamon Cookies. They’re both incredibly easy to make and there is something just so magical about the perfumed flavour of star anise with the sharp tang of rhubarb. I could eat this all day. And all night. 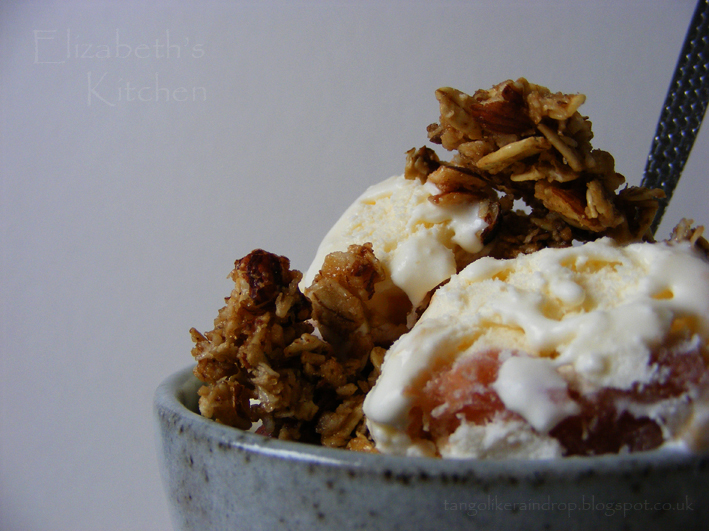 Another icy treat comes in the fabulous form of this Rhubarb Ripple Ice Cream with Hazelnut Oat Clusters from Elizabeth’s Kitchen. Doesn’t it look sensational? I can just imagine how good that creamy rhubarby ice cream tastes alongside the nutty crunch of the hazelnut clusters. Oh yes, this is my kind of dessert. 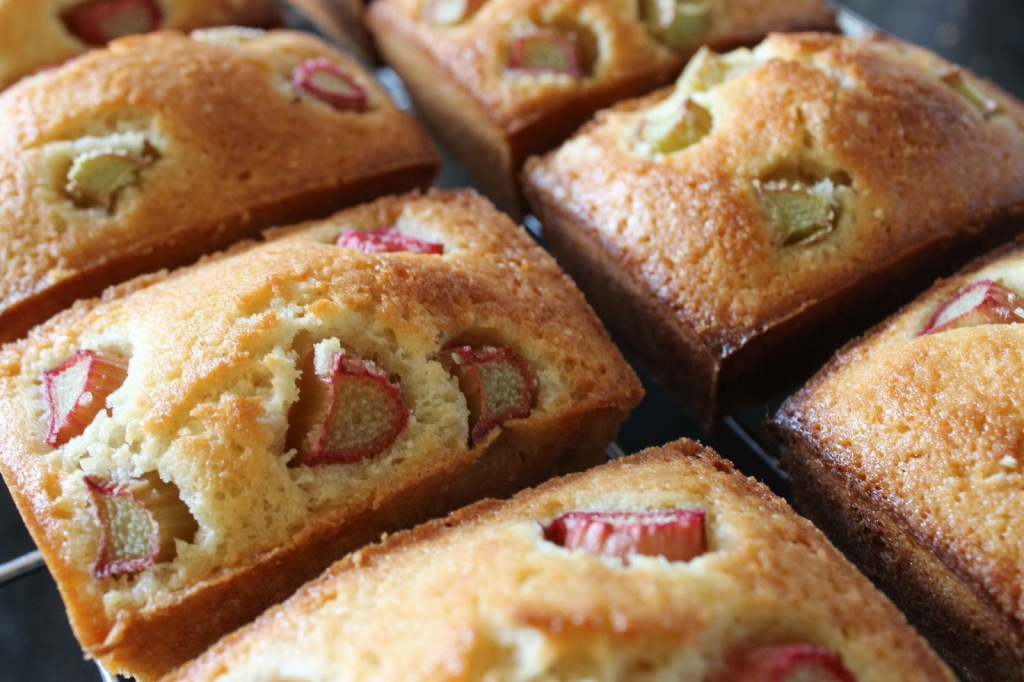 It’s the turn of Ness at JibberJabberUK to tempt us next with her pretty Rhubarb, Lemon and Ginger Friands. There’s something very cute about mini loaves; I think I might have to get myself some mini loaf tins so I can have a go at these. They look perfect for a properly civilised afternoon tea.

It was a delight to welcome Rich In Flavour to the Recipes for Life challenge for the first time and what a wonderful first entry! This Spiced Lemon & Rhubarb Cheesecake looks simply gorgeous and I love the sound of the lemon syrup flavoured with star anise and Szechuan pepper. I simply must try this recipe!

Janice from the Farmersgirl Kitchen baked us another batch of muffins; this time Spiced Rhubarb & Lemon Muffins, featuring cinnamon and “little nuggets of intense crystallised ginger”, which sounds right up my street. They look lovely and moist and as with the earlier muffins from Chez Foti, I can easily picture myself consuming a few of these with a mug of coffee for a lazy Sunday morning brunch. 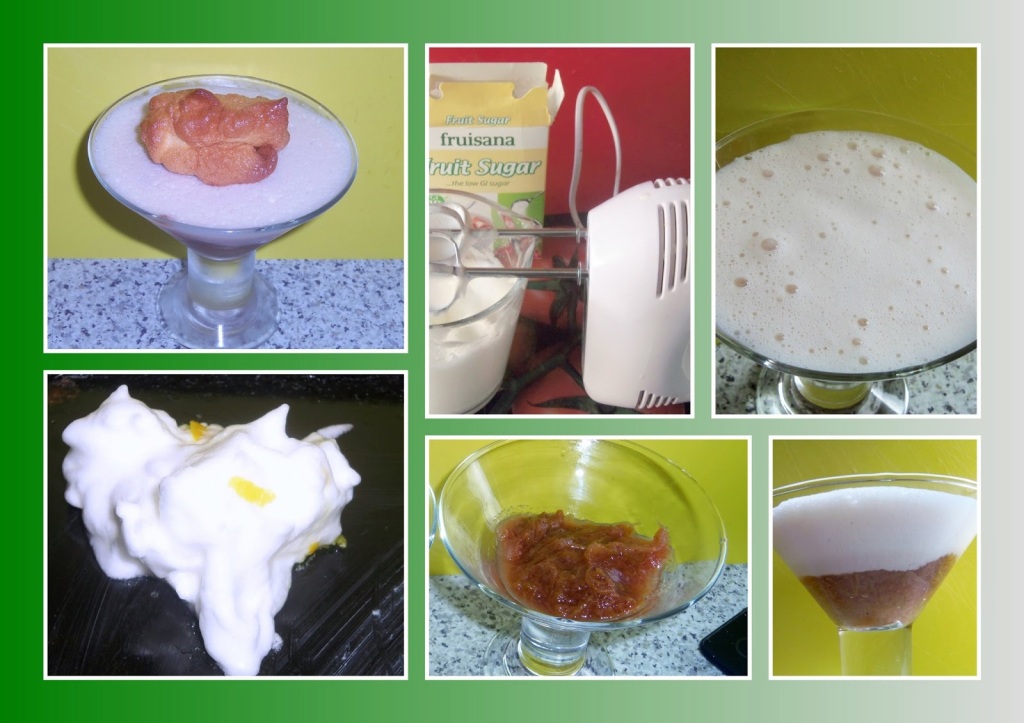 Fun as a Gran returns with a second entry next; a very creative Rhubarb Syllabub served with a lemon meringue, which I imagine would bring a perfectly light crunchiness to complement the smooth creaminess of the rich syllabub. 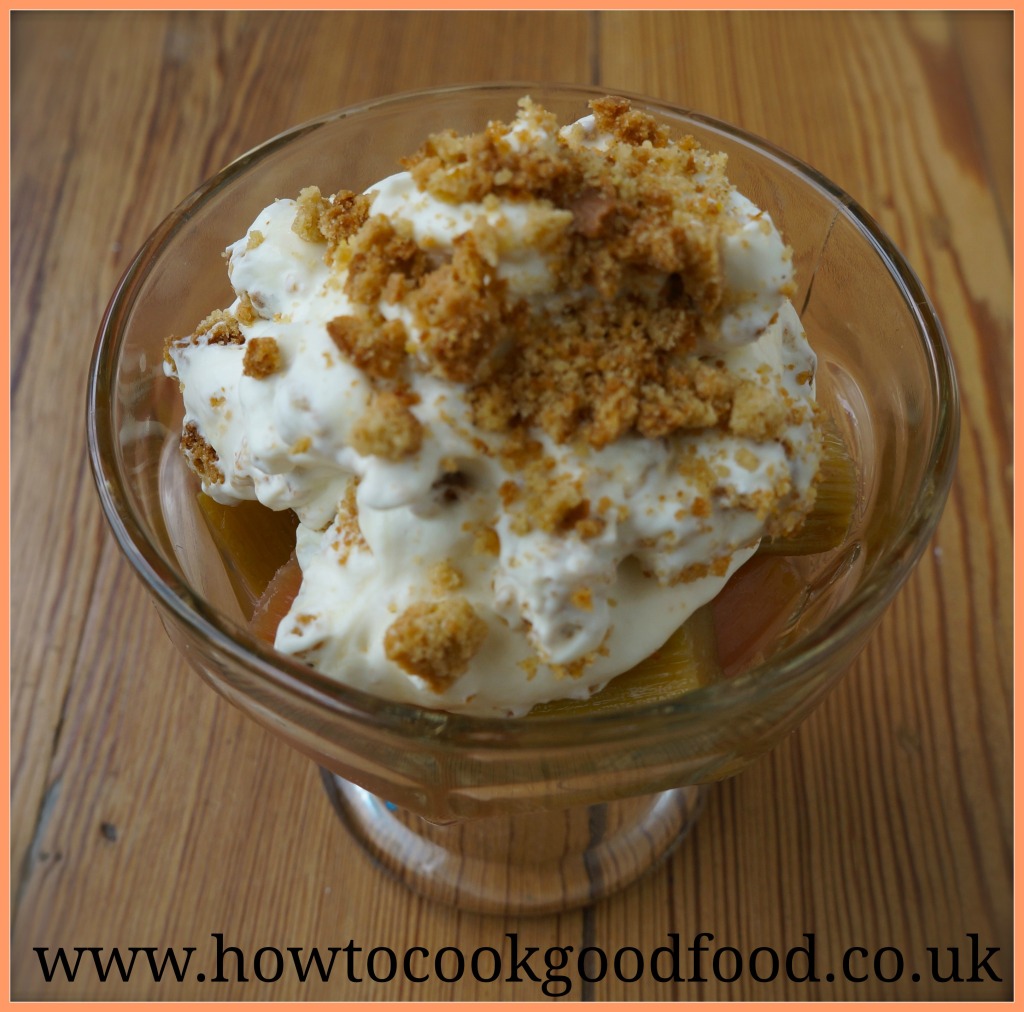 Laura at How to Cook Good Food always comes up with heavenly creations and this Lavender Poached Rhubarb with Ginger Custard Cream is no exception. It sounds like Laura has been getting through quite a lot of rhubarb recently from her allotment, including rhubarb vodka which I’m rather intrigued by, as well as raw rhubarb in an Ottolenghi sour salad. But this poached rhubarb is definitely the one I want to try first. Simply beautiful. 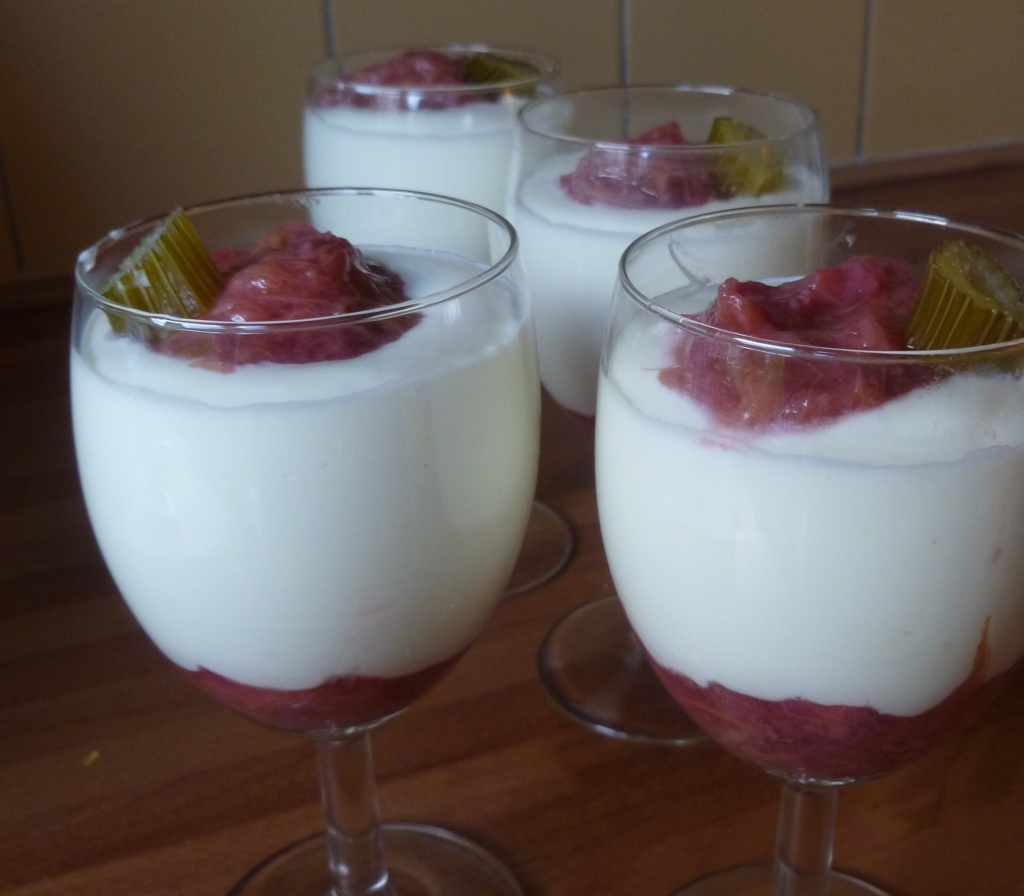 There is nothing remotely foolish about this Fennel Rhubarb Foolish from Mel at Edible Things. She flavours her rhubarb fool with fennel seed and it is garnished with candied fennel. This sounds to me like an incredible flavour combination; one Mel was inspired to come up with after eating fennel-flavoured sausages with roasted rhubarb as part of a rhubarb tasting menu at the Rollende Keukens festival in Amsterdam. Love it! 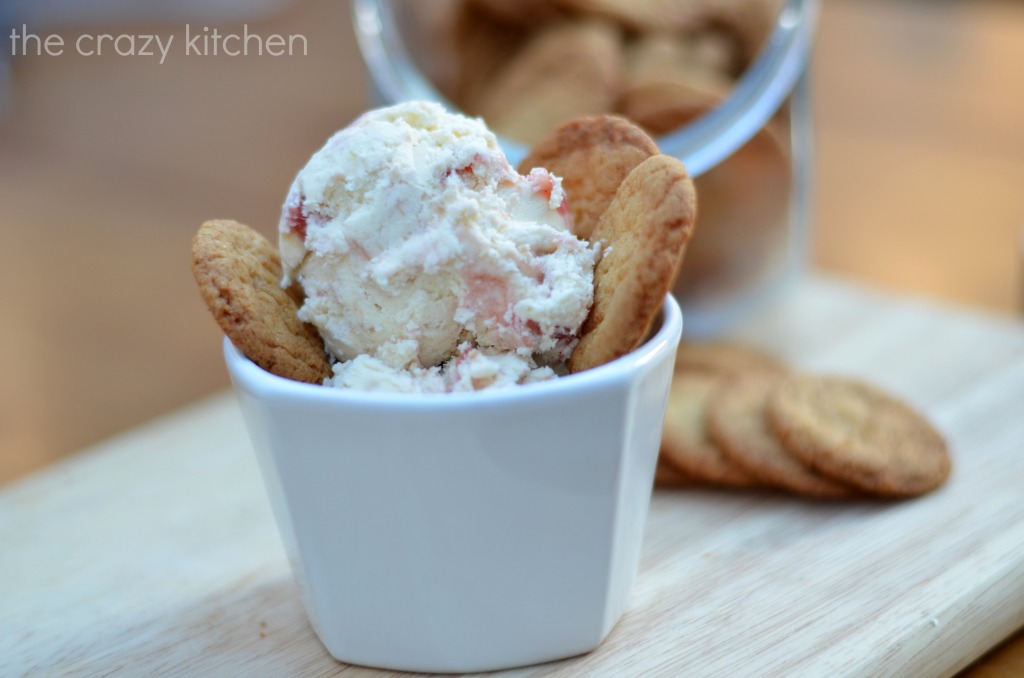 We have a second helping of  Rhubarb Ripple Ice Cream now, this time from Helen at The Crazy Kitchen and served with Mini Spiced Lemon Cookies. As Helen says herself, this is “bloody gorgeous”! 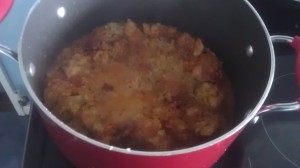 I really wasn’t expecting to see a curry amongst our entries this month, but here it is, a Pork and Rhubarb Curry with Lemon Pilau Rice from Spurs Cook. Martin says he got the idea of using rhubarb in a curry by a certain celebrity chef who stir fries pork with rhubarb. He decided to go in a slightly different direction and came up with a curry. Inspired! 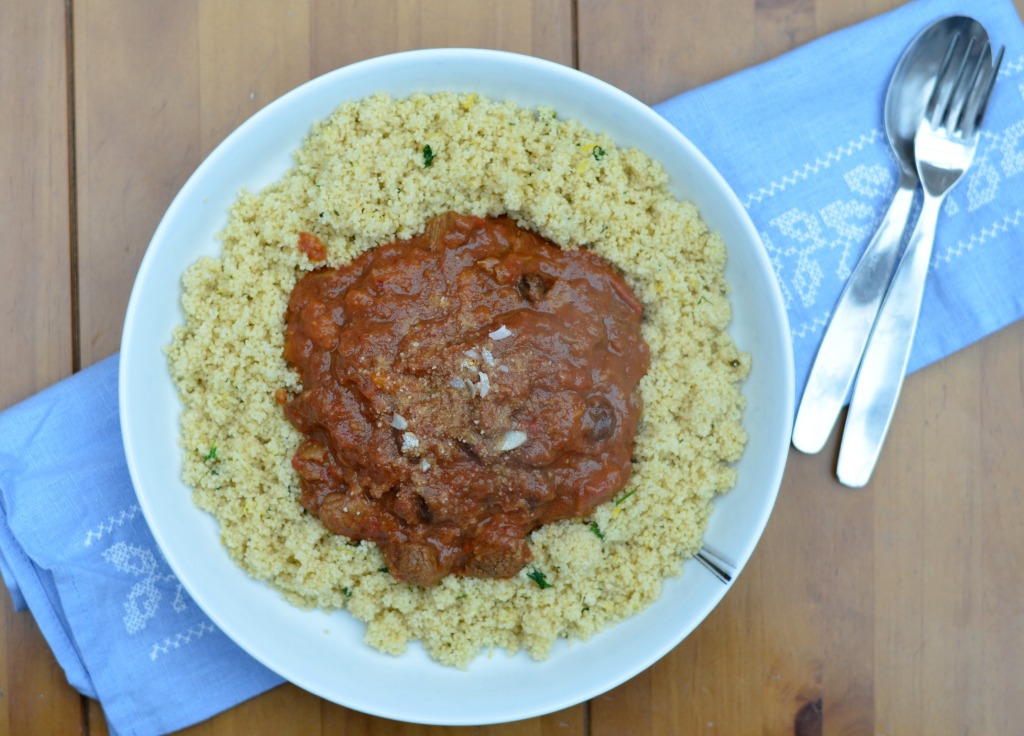 Here’s another delicious savoury rhubarb dish – The Crazy Kitchen’s Moroccan Lamb & Rhubarb with Lemon & Coriander Cous Cous. Helen freely admits she’s not completely convinced rhubarb even grows in Morocco but it’s the cinnamon and dried fruit in this dish that give it a wonderful Moroccan flavour. It’s an incredibly easy recipe, mostly throwing things in a pan and leaving them to do “their thing”, which is the kind of cooking I adore, and I know my family would really go for these flavour combinations. 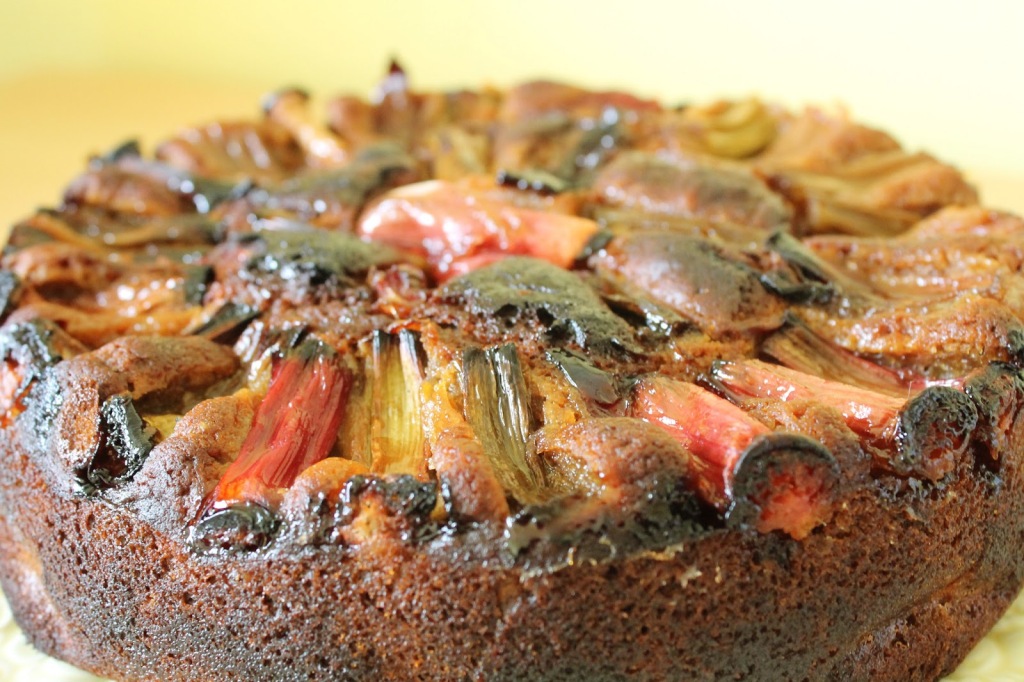 Back to baked goodies next with this Rhubarb, Lemon and Ginger Cake, a second tasty entry from JibberJabberUK. Ness made it for her local Clandestine Cake Club meeting and it was completely devoured save for one slice. And those clandestine cake makers certainly know their stuff! 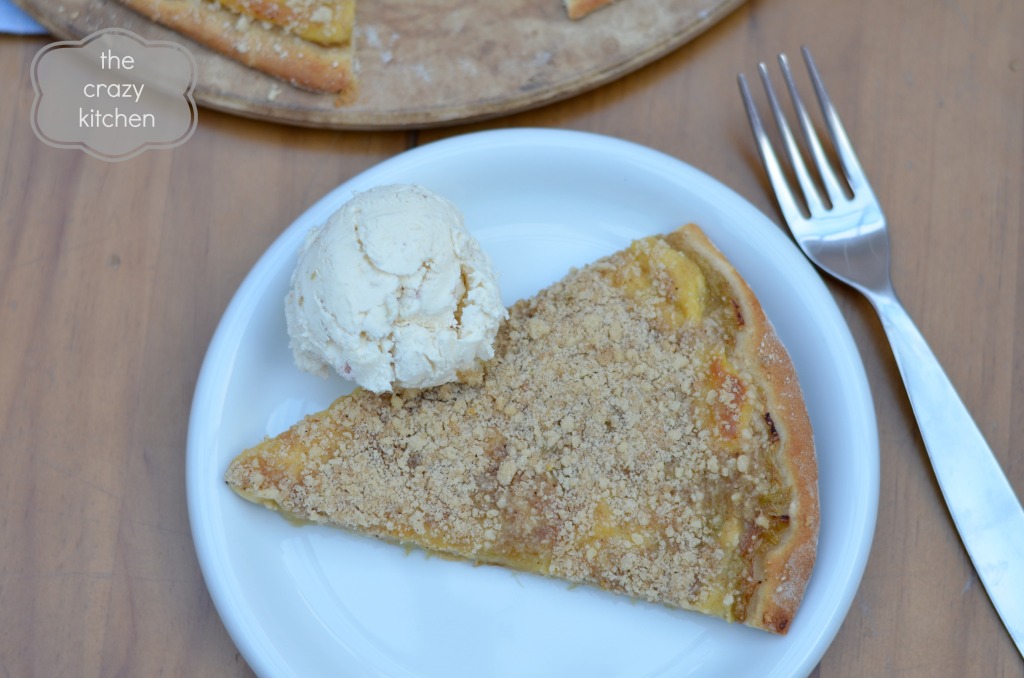 Why do pizzas have to be savoury? This is the question posed by Helen at The Crazy Kitchen as she delivers a fabulous Rhubarb and Custard Crumble Pizza. Isn’t it a great idea? Another lovely simple recipe from Helen that I can’t wait to try out. 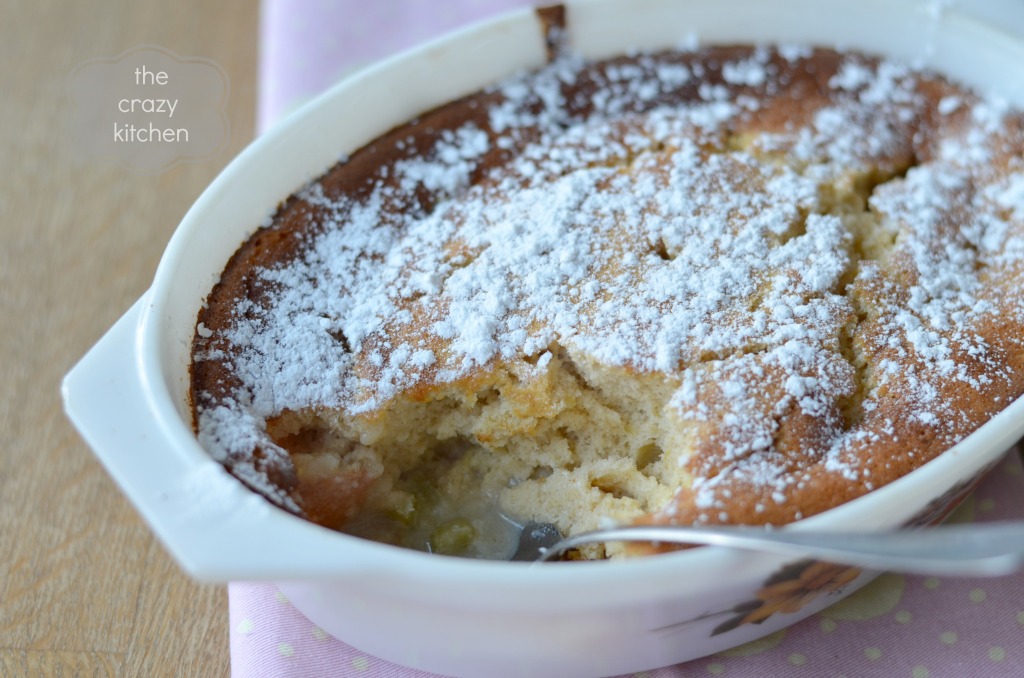 Not content with three rhubarb dishes, here comes Helen at The Crazy Kitchen with entry number four! She offers us a scrumptiously rib-sticking Lemon and Rhubarb Pudding that reminds me of an old fashioned pud my Nana often makes. I’m starting to drool slightly thinking about just how satisfying this would be. Nom nom!

Guess what? Here’s The Crazy Kitchen with her fifth (yes, I said fifth!) entry for May’s challenge! This time she’s rustled up a Cheese and Rhubarb Chutney Tart – is there no end to Helen’s culinary talents when it comes to the humble rhubarb?! I’ve been thinking I should make a rhubarb chutney to use up some of the bags of rhubarb stocking up my freezer, and now I have the perfect recipe. 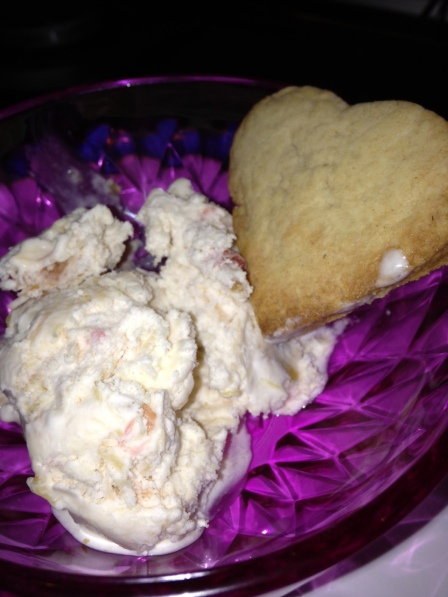 I’m really pleased to welcome another first-timer to the Recipes for Life challenge. The Grumbling Tummy has created another tempting Rhubarb Ice Cream which she serves with Lemon Spiced Biscuits – I can’t believe this is the first time Hazey has made her own ice cream as it looks fantastic. 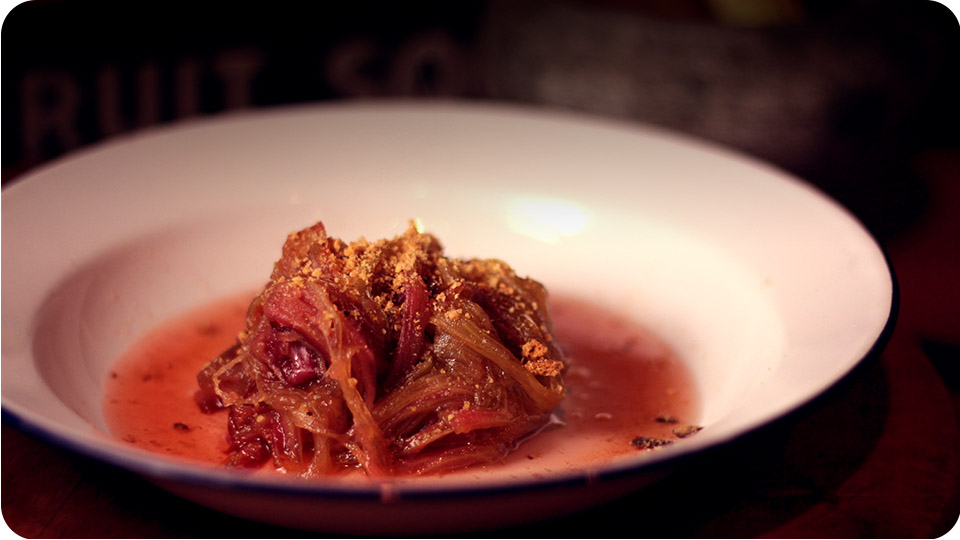 I was surprised to receive a curry recipe this month, and I was equally surprised when Matt and Corpy told me they were planning on making Poached Rhubarb Spaghetti as their entry. I was totally intrigued to see how it would turn out and the two dads didn’t disappoint. Doesn’t this look so good? I know my girls are going to love it when I give it a go very soon. 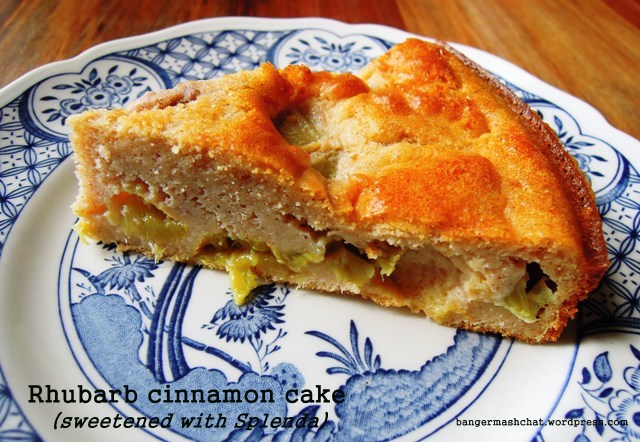 Finally here is another entry from yours truly – a simple Rhubarb Cinnamon Cake which I made the other weekend for a friend with diabetes using a sugar alternative. It’s not half bad and we ended up eating some the next day for breakfast. How many times have I mentioned eating cake for breakfast in this post now I wonder?

So you see what I mean? A truly eclectic assortment of wonderful rhubarb recipes and not a single crumble in sight, unless you count crumble-topped muffins, which I don’t. Who’d have thought rhubarb could be so very versatile?

The cookery group at SWALLOW found it nigh on impossible to settle on a single winner, and so we have two – one for a savoury dish and one for a sweet.

The winner of the sweet category is The Garden Deli for her beautiful Rhubarb and Lemon Scones. We all thought these looked so deliciously delightful, yet so simple to make too, which is what we look for in Recipes for Life. Congratulations Sarah!

And the winner of the savoury prize? Well, it had to be The Crazy Kitchen for her incredible Moroccan Lamb and Rhubarb with Lemon and Coriander Cous Cous. Another dish that’s simple to prepare and absolutely packed full of flavour, this had to win top place – even though it means Helen has now won three months in a row! This woman is on a serious roll! But seriously Helen, you totally deserve it and we’ll all been staggered by the support you have shown this challenge. Thank you!

Thank you also to everyone who entered May’s Recipes for Life. I was blown away by the number of entries this month, every one a winner its own right. If you’re stuck with a glut of rhubarb, you can’t fail to be inspired by this little lot!

Watch this space for details of the three ingredients for June’s challenge – I’ll be announcing the next lot very soon and I really can’t wait to see what you make of them. Until next time! 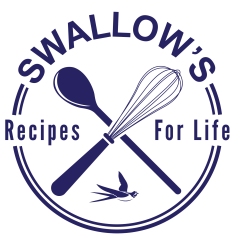 2 thoughts on “Round Up: May’s Recipes for Life challenge”