Before I go any further I want to say that Cranks today is probably quite different from how I remember Cranks growing up in the 1980s.

My step-mum was a big fan of Cranks. When we went shopping in the West End, we’d invariably end up in the Cranks restaurant just off Carnaby Street and we ate many dishes from their recipe book.

In case you don’t know Cranks, they’ve been around since the 1960s and were one of the first brands I’m aware of that were exponents of healthy eating. This of course is fantastic. But as a kid, I grew to associate Cranks with worthy food: brown rice, heavy wholemeal pastry, nut roasts and – this for me was the worst part – wholemeal pasta. Now I know we need roughage in our diet. But there is a right way and a wrong way to eat your fibre, and a bowlful of wholemeal spaghetti is for me most definitely the wrong way.

I’ve just taken a peek at the Cranks website. They are still going strong it seems and they look very different from the Cranks I knew growing up. There are some recipes I’d actually be quite interested in trying.

Despite my lack of enthusiasm for Cranks as a youngster, there was one dish that my step-mum could make time and time again from their recipe book and I’d be happy, and that was Homity Pie – a tasty open cheese and potato pie. OK so it was made with wholemeal pastry but I could cope with that when balanced with the lovely buttery, cheesey, garlicy potatoes and onions. As with all my favourite foods, so very simple and so very delicious. In fact, when I left home for university, this was the only recipe I copied out to take with me.

I’ve played with the recipe a little. I use half wholemeal and half white flour for the pastry. Sometimes I add ham or bacon to the filling. And quite often I add whatever leftover vegetables I happen to have in the fridge. Last time I baked it, I used half a celeriac I had hanging around, so this appears in the recipe below. 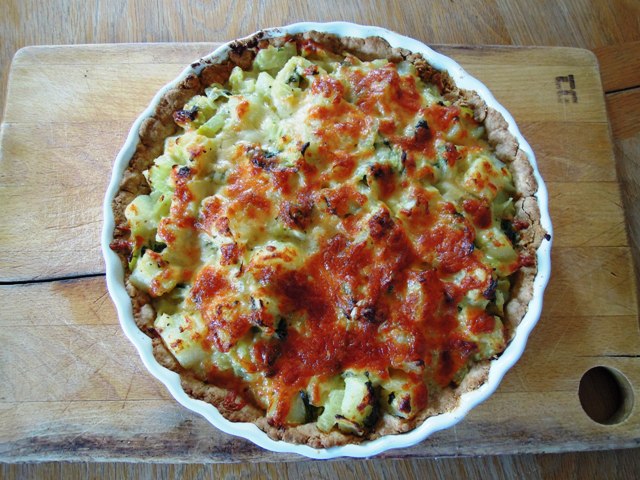 To make the pastry, place the wholemeal and white flour, baking powder and salt in a basin and rub in the butter with your finger tips until you have a breadcrumb-like mixture. Gradually add the water and mix in with a knife to form a dough. Wrap in clingfilm and leave in the fridge for 20 minutes.

In a large pan of salted water, boil the potatoes and celeriac until just tender, then drain and return to the pan.

Heat the olive oil in a pan and gently sautee the onions until golden. Add the onions to the potatoes and celeriac along with the butter, parsley, 100g of the cheese, garlic, milk, salt and pepper and combine well.

Butter your flan dish – I use one that’s 25cm diameter. Take your dough out of the fridge and roll out on a floured board. Don’t worry if it’s quite crumbly. Mine always falls apart a bit and I end up moulding it into position to line the flan dish.

Simply tip your ingredients into the pastry case, flatten it out a bit so the pastry is well covered and sprinkle with the remaining Cheddar cheese.

Bake in the oven for 25-30 minutes until the pastry is crisp and the cheese topping has melted and is golden brown.