Somehow I completely failed to spot that this week is National Sausage Week here in the UK. Now if anyone should be celebrating the humble sausage, it clearly should be Bangers & Mash. The amount we consume in our house contributes significantly to supporting the British sausage industry, I’m sure.

Thankfully, I had this very tasty sausage dish waiting in the wings to appear on the blog – a perfect winter warmer for all the family on these darker, colder days.

So bumped up the running order a little, I bring you the ‘Star Wars’ sausage stew, a recipe my children (and us grown ups too) adore, which I discovered in my old Blue Peter Book of Gorgeous Grub, circa 1980. The topping of crushed up plain crisps and grated cheese takes me back to my childhood when crisps seemed to appear in hot dishes all the time.

As a child I was a committed fan of the BBC children’s programme Blue Peter, winning a total of four badges over the years in various competitions. I was forever pestering my mum for old boxes, loo roll holders and sticky backed plastic so that I could make the latest Blue Peter creation.

But for some reason I never tried to recreate any of their recipes. It was my dad who recently dug out this cookbook, which, to be totally honest, I can’t remember having as a child as I wasn’t really all that interested in food back then. Oh how things change! So I’m rather enjoying working my way through all the recipes that were submitted by Blue Peter viewers, answering the call from presenters Simon Groom, Chris Wenner and Tina Heath.

We called it this because it was invented when we wanted a hot meal waiting for us when we came home from seeing the film ‘Star Wars’.

I wonder where Elspeth is now and whether she still makes her Star Wars sausage stew?

Heat the oil in a large casserole and brown the sausages, then remove to one side. Add the onion and bacon to the casserole and gently brown. Throw the sausages back in, as well as the beans, sweetcorn and tomatoes. Add the bay leaf, season well with salt and pepper and give it all a good mix.

Top with the sliced potatoes and season again. Cover with a lid or foil and cook in the oven for around two and a half hours.

Remove the lid or foil and turn up the heat to 190ºC / gas mark 5 and cook for another half an hour to brown the potatoes.

Finally top with the crushed crisps and cheese and return to the oven until the cheese has melted. Serve immediately. 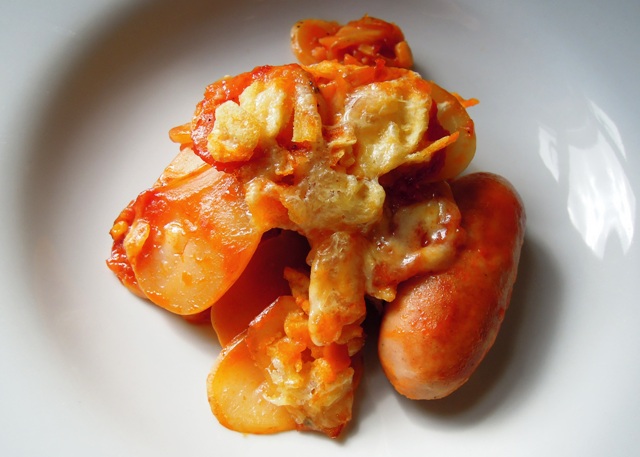