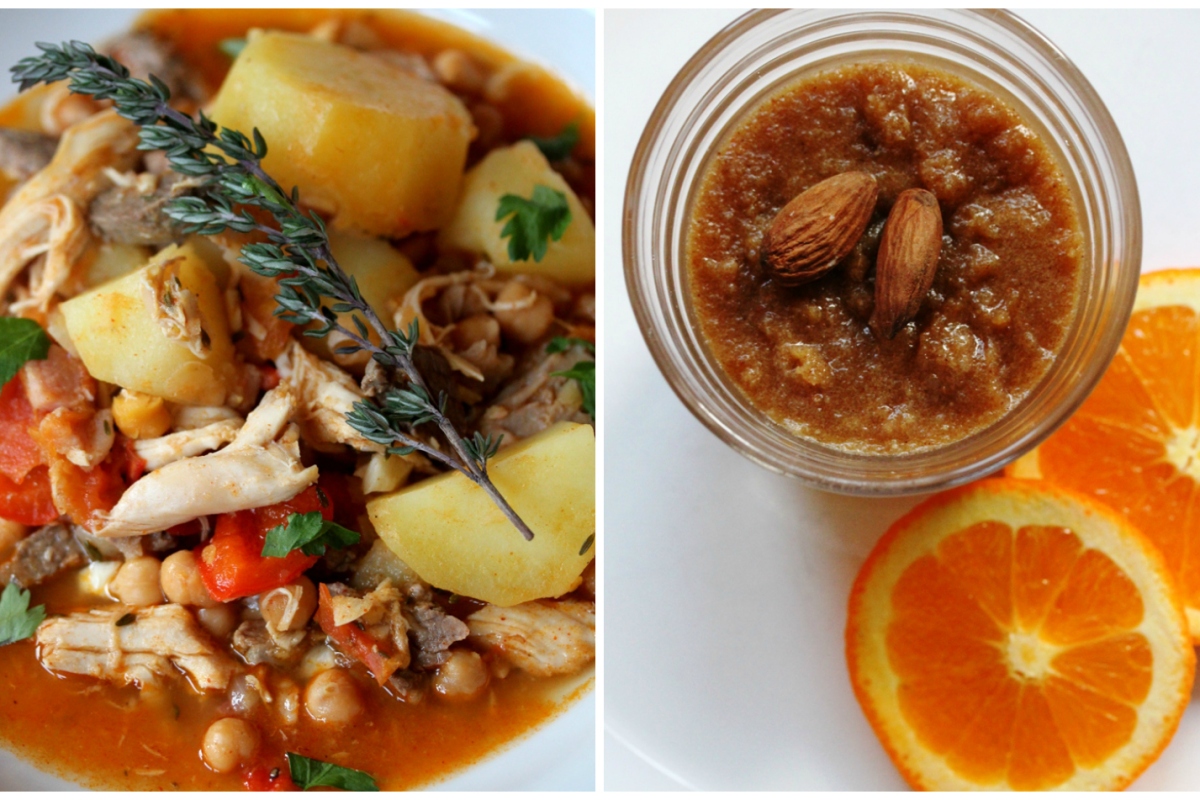 Today has been quite possibly one of the coldest days of the winter so far; a cold-to-the-bone kind of cold when it takes an hour in a hot bath to thaw out. In the depths of winter, I can’t help but dream about summer holidays in warmer climes…

When Monarch Holidays invited me to recreate some traditional Spanish recipes for their new online Island Cookbook, I thought it was a perfect opportunity to feed my craving for sunshine food and cheer up these dark, dank days. I took my inspiration from the third largest of the Canary Islands, Gran Canaria, where I have fond memories of holidaying with my family as a teenager – although it has to be said, I can’t actually remember too much of the local fayre from that visit. Back then I was more interested in ogling the Spanish waiters and having my first taste of Sangria.

And so a little recipe research was required. It appears Canarian cuisine, according to Wikipedia at least, is based on fresh, simple, rich ingredients, creating a varied mix of seafood and meat dishes. Canarian food is very much influenced by other cultures, in particular the original aboriginal inhabitants of the islands and Latin America, as well as Africa to a lesser extent.

Two dishes caught my eye. While they both sounded fresh and sunny and colourful, they also make the most of seasonal British ingredients and store cupboard favourites; ideal winter fodder to cheer us up in the gloom of January. 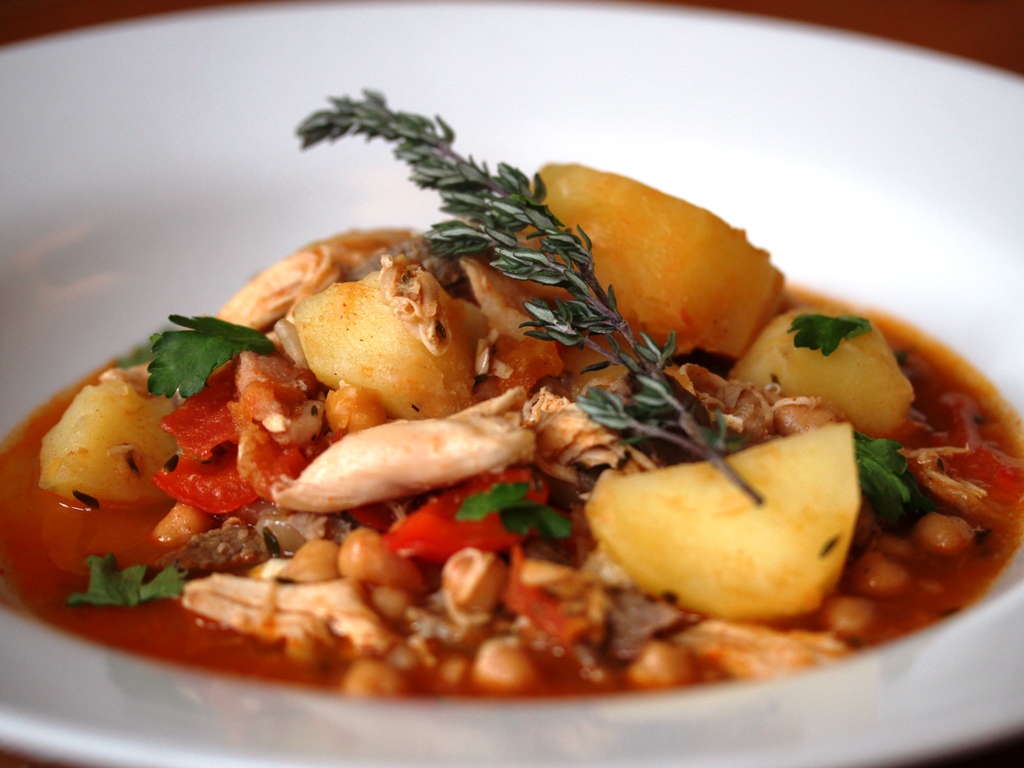 Ropa vieja translates literally and rather unattractively as ‘old clothes’, but don’t worry – it’s so much more delicious than that might sound. It’s a light stew made with chicken and beef, along with potatoes and chickpeas. Sometimes it also features a little chorizo or pig skin; I made mine with a rasher of smoked back bacon, which gave it a lovely smoky flavour. Traditionally the potatoes are fried before being added to the stew, but I missed out that stage as I do love a recipe that only requires one pot to save on the washing up. As a result of Canarian emigration, ropa vieja is now the national dish of Cuba, where it is made with beef alone, cooked slowly in a rich tomato sauce with bell peppers.

For pudding, I fancied trying out a sweet Canarian dessert called Bienmesabe, which in Spanish translates as, “it tastes good to me”. It’s made from ground almonds, honey, egg yolks and lemon zest – which I substituted for orange zest, as that’s what I happened to have in already, and is extremely easy to prepare. It’s very good, although very rich, so you really don’t need to be too generous when you’re dividing it between the serving glasses.

Here are my versions of the recipes. While I’ve played fairly liberally with the various recipes I discovered online, I hope the flavours are fairly faithful to the real thing – and even if they’re not, both dishes are good and tasty, getting the seal of approval from my own family. 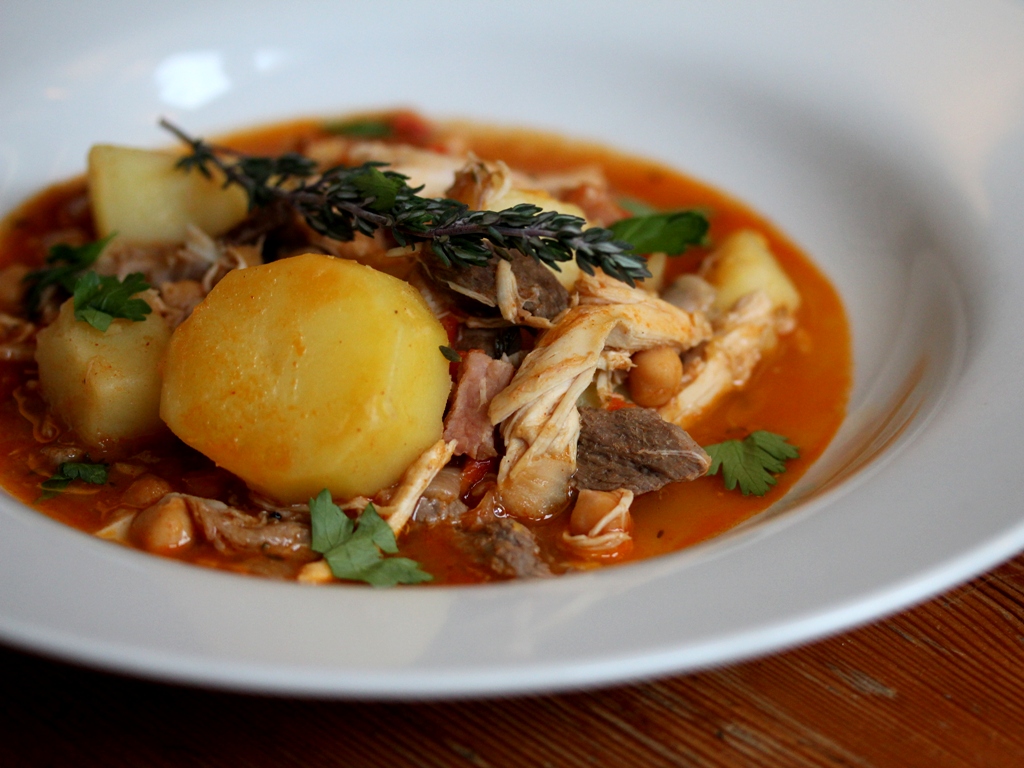 Place the beef in a pan and cover with water. Bring to a boil and simmer until just cooked through. Remove and leave to cool.

In a large casserole, heat the olive oil and gently fry the onion and red pepper until soft. Add the bacon and cook through.

Season with paprika, salt and pepper and add the chopped tomatoes, garlic and chickpeas. Give it a good stir,

Pour in the wine, stock, bay leaf and time. Stir well and bring to a gentle simmer.

Shred the beef and chicken and stir into to the casserole. Cook for 10 minutes.

Add the diced potatoes and cover. Simmer for 15 minutes.

Uncover after 15 minutes and allow to simmer until the potatoes are cooked through.

Bring to the table and serve. ¡Buen provecho!

In a large frying pan over a medium heat, dry fry the ground almonds for around 5 minutes until golden, stirring constantly. Remove from the heat and leave to cool.

Pour the  water and honey into a large saucepan and bring to the boil. Simmer gently for 5 minutes to make a syrup.

Stir in the almonds, cinnamon and orange zest and cook for 5 minutes until thickened, stirring all the time. Leave to cool slightly.

Whisk together the egg yolks and milk in a small bowl until frothy. Stir into the almond mixture and return to a medium heat. Keep stirring all the time. When it comes to the boil, immediately remove from the heat.

Divide among serving glasses and chill in the fridge. Serve cold with slices of orange, or vanilla ice cream and cat’s tongue biscuits.

Disclosure: This post was sponsored by Monarch Holidays. To find out more about their Gran Canarian packages visit: www.monarch.co.uk/canary-islands/gran-canaria/holidays.

4 thoughts on “Ropa Vieja and Bienmesabe”