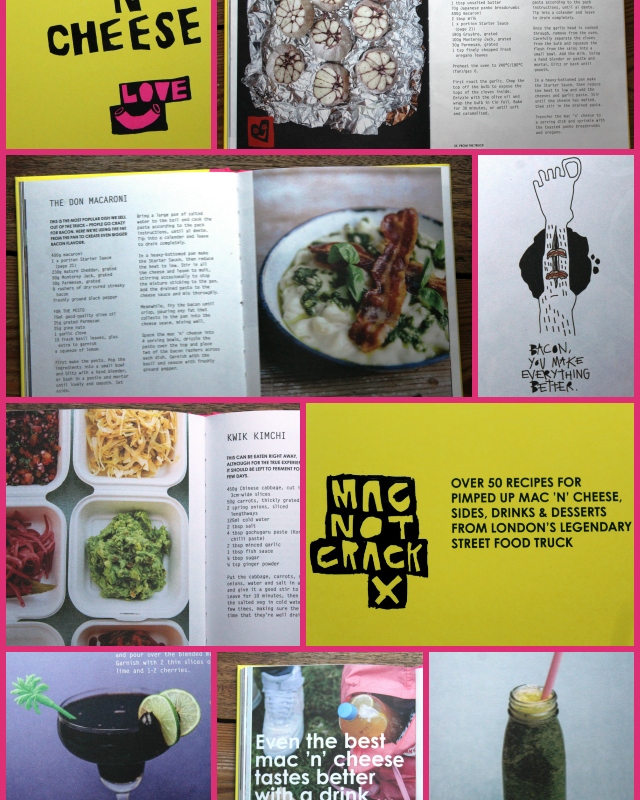 “But don’t you only really need one recipe for mac ‘n’ cheese?”

That’s the reaction I had from most of my friends when I told them I was reviewing a mac ‘n’ cheese cookbook. Normally as a Brit, I’d say macaroni cheese of course but since Anna Mae is all about spreading the Southern-food love (Southern States of America as opposed to the Southern Counties of England), really – only mac ‘n’ cheese will do…

So do we need a whole cookbook of mac ‘n’ cheese recipes. Oh Lordy, yes indeed. If the first two Anna Mae recipes I’ve tried are anything to go by, then keep the variations coming!

Who is Anna Mae?

Or who are Anna Mae to be precise? They are Anna Clark and Tony Solomon, the foodie force behind London’s ‘legendary’ street food truck. They’re addicted to mac ‘n’ cheese and have turned their addiction into a profession. Some go so far as saying they make the best mac ‘n’ cheese in London.

Not surprisingly, Anna and Tony get asked this all the time. After a road trip around the US, they’d been experimenting with all kinds of Southern-style food on their new stall and just hit upon mac ‘n’ cheese as “the dish among all others that we loved the most.

“Mac ‘n’ cheese was our lobster. Whether it was that American staple Kraft mac in a box, or a poncey black-truffle number, posh or not, mac ‘n’ cheese had always got us in our gut. It’s infused with a primal pull that leaves us satisfied but forever looking for our next cheesy hit…”

Four years later, Anna Mae’s is itself a huge cheesy hit in London and now there’s the cookbook, which I highly recommend you get yourself a copy of. Firstly there are the Anna Mae tips, which are in themselves priceless. My personal favourite has to be…

Then there’s Anna Mae’s guide to cheeses, from Cheddar to Stilton, Mozzarella to Taleggio. With Anna Mae, there are no hard rules on the best cheese to use in a mac ‘n’ cheese, although the classic Monterey Jack is pretty prominent – “Jack is a bit of a slut – its versatile, mild flavour goes with everything.”

Once they’ve shown you their starter sauce recipe, then it’s a gorgeous headfirst dive into the awesomely named mac ‘n’ cheese recipes themselves, starting with 14 “classic mac recipes” From the Truck. There’s the #CheesusLovesYou (the recipe that started Anna and Tony on their mac ‘n’ cheese pilgrimage), the Spicy Juan (with chipotle paste and jalapeno chillies), the Jewish-deli inspired Macshugganer and the Glastonbrie (“this pun is too good to miss, just like the festival that inspired it”).

And then you’re catapulted into sheer sensory overload with the Bringing Sexy Mac chapter, full of hot toppings and filthy combos. Here you’ll find marrow bone in the cheese sauce, and even lobster. There’s a version called Machos, where, you’ve guessed it, mac ‘n’ cheese takes on the all-time classic sharing dish, Nachos. And there’s even one with a fried egg on top. But of course.

If that wasn’t OTT enough for you, just wait til you see the Macology chapter, where things really get experimental. If you’re short of time,there’s The Quick One; if you’re dieting, there’s the Mac Boy Slim; and if cheese simply isn’t your thing (you what?!), there’s the Mac No Cheese. And if you’re ready to go completely trailer park trashy, how about deep-fried Mac ‘n’ Cheese Fries or the Superfry Snack Mac, balls of last night’s leftovers stuffed with mozzarella, coated in egg and flour and deep-fried to glorious golden abandon.

To return to that original question: do you really need more than one mac ‘n’ cheese recipe? Absolutely. So long as they’re from Anna Mae, keep them coming! From now on I reckon my weekly meal plan is all set to feature at least one serving of mac ‘n’ cheese in one funky form or another. Although it’s going to be hard not to keep going back to the two we’ve already tried: the sumptuous Don Macaroni, topped with crispy bacon and velvety homemade pesto, with bacon fat in the cheese sauce for even bigger flavour; and the Date Night, featuring a whole head of roast garlic and topped with crunchy panko – vampires beware!

The book itself is a feast for the eyes too. With its gorgeously garish and cleverly kitsch design, retro styling, super cool photography and witty writing, this is a cookbook that leaves you with a big fat smile on your face. A huge thumbs up!

Disclosure: I was sent a complimentary copy of the Anna Mae’s Mac n Cheese for review purposes. No money exchanged hands and all opinions expressed are my own.