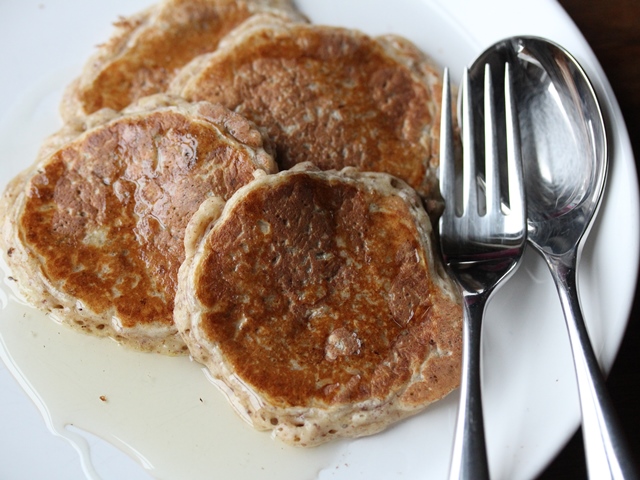 The world and his wife are going crazy for crepes at the moment, and we’re no exception here at Chez Bangers where pancakes are always a regular feature on our menus.

Just in time for tomorrow’s Shrove Tuesday aka Pancake Day, I thought I’d share with you my apple, cinnamon and raisin pancake recipe, which is one of our favourite weekend breakfasts and very quick and easy to rustle up.

With the addition of a handful of rolled oats, they have a wholesomely satisfying texture, while a sprinkling of milled flaxseed means they also deliver a boost of Omega 3, iron and magnesium.

Place the flour, oats, flaxseed, cinnamon, raisins and grated apple in a large bowl. Make a well in the middle and pour in the egg and half the milk. Mix well until it forms a thick batter and then mix in the rest of the milk.

With a little oil, lightly grease a large heavy-bottomed frying pan (or in my case the Aga simmering plate) and place over a medium heat. When the oil is hot, use a tablespoon to carefully spoon the batter onto the plate or pan, spacing well apart. Cook for only around 30 seconds until tiny bubbles form on the surface, then use a spatula to flip them over. Cook again on the other side for another 30 seconds until golden brown.

Keep the drop scones warm until you’ve worked through all the batter and serve at once with honey or syrup. A dollop of Greek yoghurt and a squeeze of lemon juice works well too.