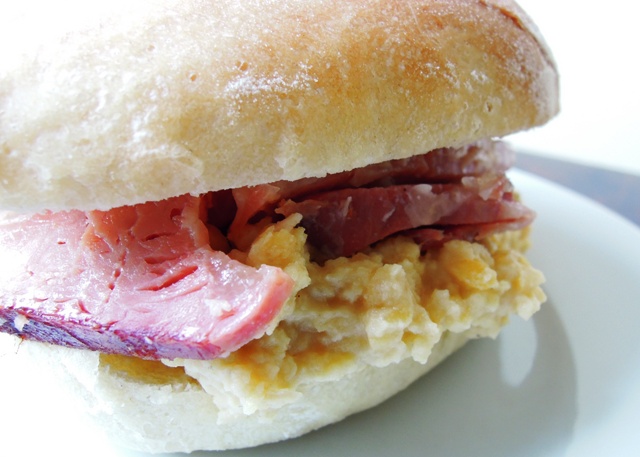 The next leg of our Around the World in Six Suppers summer tour takes us from New York to Newcastle upon Tyne, gateway to the ruggedly beautiful county of Northumberland.

Yes, it’s the second week of the school holidays and for my second dish, inspired by a ‘virtual’ holiday destination, I’ve chosen the simple but oh so tasty stottie cake filled with succulent home-baked ham and good old-fashioned peasepudding.

I lived in the North East of England from the age of five until I was twelve, so many of my early memories are firmly lodged in this part of the world.

Trips to the Roman forts along Hadrian’s Wall, bike rides along the disused railway to Wylam, days spent on the long sandy beaches at Cullercoats and Whitley Bay, boat trips from Seahouses to see the puffins and seals of the Farne Islands, exploring the castles at Alnwick and Bamburgh, listening to the pipers at the Ovington Goose Fair…

It all sounds like a rather idyllic, Enid Blyton style childhood. Admittedly, these were also rather difficult years for my family for a number of reasons, but all in all, my memories of Newcastle and Northumberland are very, very fond ones. And I can’t wait to some day soon take my own family there for a proper holiday so I can properly show it off to them.

While Northumberland might not have an international reputation for its cuisine, one of my most vivid memories as a child is sharing a lovely soft stottie cake with my Mum, generously filled with ham and salty, stodgy peasepudding. And so this is the dish I have made this week to transport us to our second holiday destination.

For those unfamiliar with the stottie I should explain it is not actually a cake. Rather it is a large, round, flattish bread roll, not normally seen outside of the North East. It is quite a heavy, doughy bread but I really like its heavy, chewiness. It is a very satisfying bread and when filled with the traditional ham and peasepudding it makes for a rather substantial meal.

Stottie cakes are easy to bake. I followed this recipe from the Ocado website and have used it again subsequently to bake bread buns for barbecued burgers, achieving perfect buns on both occasions. 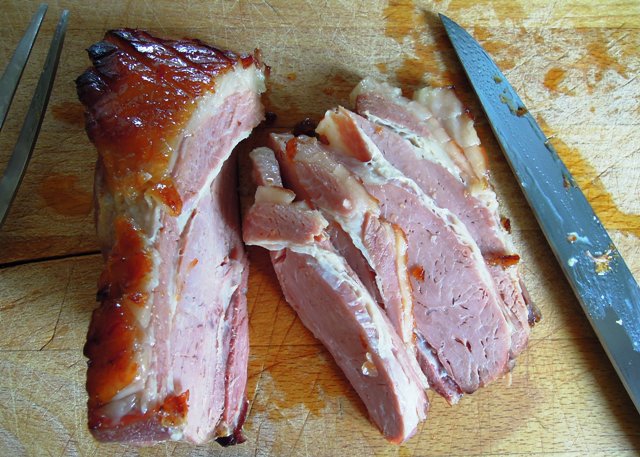 My Mum used to buy stottie cakes for us from the butcher in the Grainger Market in the centre of Newcastle. I have no idea if you could get other fillings; ours always came stuffed with ham and peasepudding. Bizarrely I would normally refuse to eat peasepudding. I couldn’t stand the stuff. But in a stottie it was, somehow, transformed.

There is nothing more delicious than a joint of home cooked ham. What’s more it is so easy to do. I simply took a 1.5kg gammon and soaked in cold water overnight. In the morning I gently brought the joint to a simmer in a large pan of fresh water, covered with a lid and put in the oven (preheated to 160°C/Gas Mark 2) for an hour and a half. You can tell if it’s cooked by sticking in a skewer; if it goes into the meat easily and the juices run clear, then it’s done.

Leave to cool a little and remove any string and skin. You can press the fatty surface of the joint with sugar and mustard powder if you like before baking, but I prefer to smother with a thin layer of sweet chilli sauce. I’m not sure what Geordie purists would make of that but I think it works well. Cover the lean meat with tin foil and place in a roasting tin. Bake in the oven (200°C/Gas Mark 6) for 10 to 20 minutes, until you get a good colour on top. 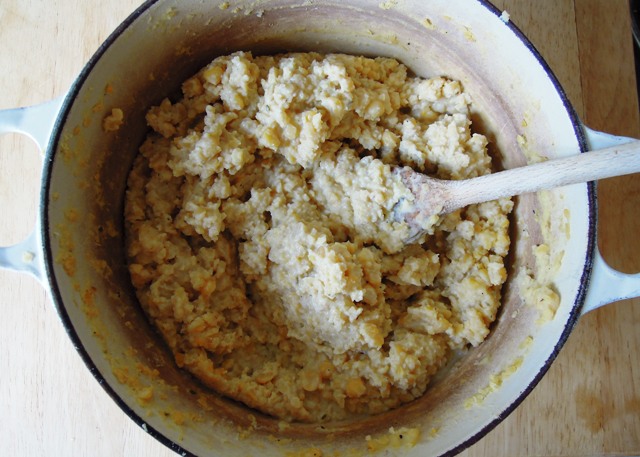 For the peasepudding, I turned to this easy recipe from The British Food Trust. You’ll end up with leftovers, which apparently you can fry up, but I still can’t bring myself to eat it any other way except for in a stottie! I can’t wax lyrical about how wonderfully delicious peasepudding is, because I’m afraid it’s not. But it is the perfect slightly salty, slighty herby, stodgy accompaniment for ham, giving you the most amazing sandwich ever.

Now my kids can’t wait to visit Northumberland so they can try an authentic stottie cake. But I think I also sold it to them when I mentioned that the first few Harry Potter films were filmed in Alnwick Castle…