“But whatever did you do for food?” asked Mr Brown. “You must be starving.”

Bending down, the bear unlocked the suitcase with a small key, which it also had round its neck and brought out an almost empty glass jar. “I ate marmalade,” he said, rather proudly. “Bears like marmalade. And I lived in a lifeboat.”

From A Bear Called Paddington by Michael Bond

We are well into Seville orange season and everyone seems to be making marmalade, so I thought it was about time I had a go myself. I’ve made lots of jams and preserves but never for some reason got around to trying my hand at marmalade. 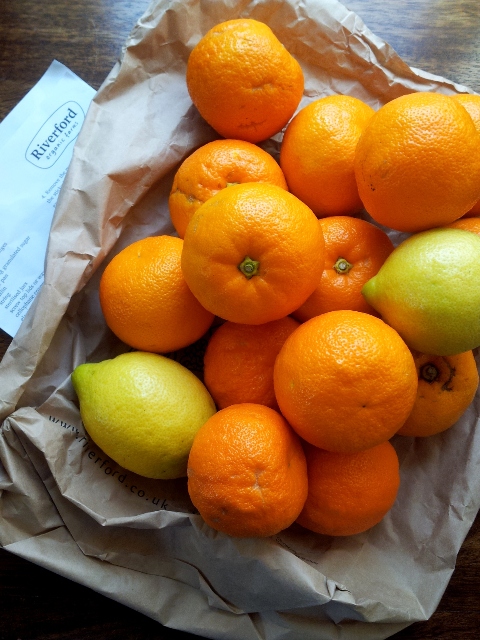 I received a marmalade kit from Riverford, which contains organic Seville oranges and lemons, and a recipe card. You just add your own sugar and jars. And they said on the website there’s no need to have made marmalade before; the Riverford recipe is pretty foolproof and you can cook along with Guy Watson (Riverford founder) in their YouTube video. Perfect.

Unfortunately the day I’d set aside to make marmalade I was absolutely full of cold and didn’t want to go anywhere near the kitchen. My husband Jason leaped to my aid and volunteered to make it instead. Result. Marmalade making is just the kind of thing he’s good at too. Any activity with lots of steps, where you need to follow detailed instructions and be a bit measured and scientific – that’s the sort of job he’s good at. And yes, our kitchen resembled a science laboratory while he was at it. 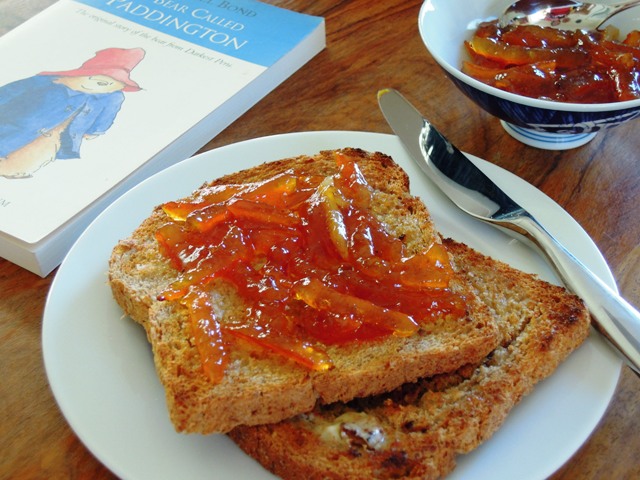 And I can report that the final result was very good indeed. Perhaps the shredded peel was a little on the chunky side for my liking and he possibly boiled the marmalade a little too long, so it ended up rather dark, but a good first effort I’d say.

If you’d like to have a go yourself, you’ll need to move quickly as Seville orange season finishes in late February. Kits are available from Riverford and you’ll also find the recipe on their website. And do watch Guy’s video too. He gives lots of useful tips like…

So now we have a cupboard full of marmalade, I’m looking forward to very civilised breakfasts of marmalade on toast with a pot of tea, reading the newspaper. While my children throw their crusts at each other and moan about having to brush their hair before school…

And with some of that marmalade I plan to have a go at this gorgeous looking honey, ginger and marmalade cake recipe from Belleau Kitchen, as well as Riverford’s Seville orange marmalade pudding.

Do you have any other good recipes to share that use marmalade?

Disclosure: Riverford provided me with a complimentary Seville Orange Marmalade Kit for this post. No money exchanged hands and all opinions are totally my own. 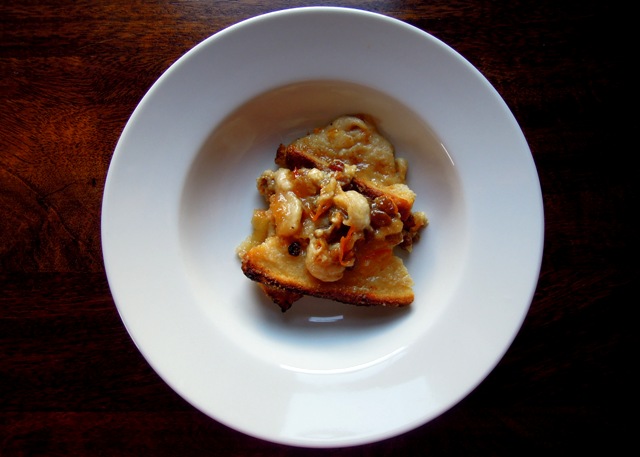 Here’s my slightly seasonal take on the humble but very delicious bread and butter pudding. What could be a more festive combination than oranges and spices? The orange in this pud comes in the form of marmalade and zest, while the spices are ginger, cinnamon and mixed spice.

I wish I could share with you fond memories of eating this as a child but, to be honest, the first time I ate bread and butter pudding was only a few years ago when I tried Nigella Lawson’s ginger-jam version from her Nigella Bites cookery book. It was a pudding that never really appealed to me when I was younger. It sounds, well, a bit boring really. I mean, bread? In a pudding? And butter. Who’s going to get excited about that?

But oh! Now I’ve tried it, I can safely say it is delicious and now one of my favourites. Crunchy and slightly chewy on top, soft and gooey underneath. It might not have been one of my nursery food memories, but it will be one of my children’s. Plus it’s so simple to make and comes with its own ready-made custard. What’s not to like?

This recipe is loosely based on the one in Nigella Bites.

Grease a medium-sized pudding dish with some of the butter.

Put the sultanas in a small bowl and mix with the apple juice and ginger. Pop in the microwave and heat on medium power for a minute and then leave to stand. This is Nigella’s trick for plumping up the sultanas. She uses rum but I didn’t think the kids would be too keen on that.

Make up sandwiches with the white bread, spreading the butter and marmalade generously. Cut in quarters into triangles and then arrange in your dish, some pointing up and some pointing downwards. Sprinkle over the sultanas and pour over any remaining gingery apple juice.

Lightly whisk the egg yolks and egg in small bowl and mix in 3 tablespoons of the demerara sugar and mixed spice. Then add the cream and milk and combine. Pour over the marmalade sandwiches and leave for 10 minutes or so to give the custard a chance to soak into the bread.

Dot some butter onto the visible bread. Mix the ground cinnamon with 2 tablespoons of demerara sugar and sprinkle over the top. Finally drizzle the honey over the top too.

Place the dish on a baking tray and cook in the oven for around half an hour until the custard has set and the crusts poking out are browned and caramelised. Leave for 10 minutes before serving. It will be agony waiting that long as it smells so good!

I am finally growing in confidence as a baker. For a long time I have thought of myself as a good cook but not a good baker. But slowly that is beginning to change.

Until recently I would never experiment with a cake recipe because baking just didn’t come naturally to me.

The world seems to fall into two camps: those who were born to bake and those who weren’t. I’ve always fallen into the second camp. But I’m gradually discovering  that baking can actually be learned. It’s as much about confidence in the kitchen as anything, a bit of practice and not giving up the first time things go pear-shaped.

In recent weeks I’ve come up with my own recipe for pistachio scones and tried my hand at hot cross buns (recipe coming soon). And I’ve also come up with this recipe for chocolate orange cupcakes, which I’m really rather proud of. They’re sticky and gooey and indulgent and satisfying. My little girls asked for seconds. What more can you ask for?

Now don’t get me wrong. I’m not inventing recipes from scratch. Far from it. But I’m having fun playing around with other people’s recipes.

My experiments don’t always work out. A few weeks ago I tried making my version of a lemon tart using polenta and caraway. It was truly disgusting. I wasn’t too impressed with my Cheerio crunchies either – my attempt at using up a bulk purchase of a breakfast cereal my kids once loved then decided they no longer like.

Anyway, back to the chocolate orange cupcakes. The idea for these came from the good old Terry’s Chocolate Orange. Well, where else? I’ve used Nigella Lawson’s recipe for chocolate-cherry cupcakes as my starting point and then quite simply swapped the cherry ingredients for orange ones. Perhaps I’m being too honest here? That sounds too easy now I’ve typed it. But it did honestly feel quite inspired to me at the time… 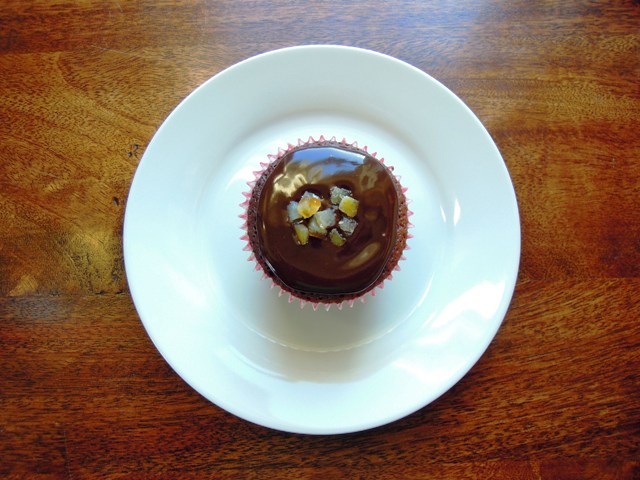 Melt the butter in a pan over a low heat and then add 100g of the chocolate. When the chocolate starts to melt, remove from the heat and stir in the marmalade, orange zest and juice, sugar, salt and eggs. 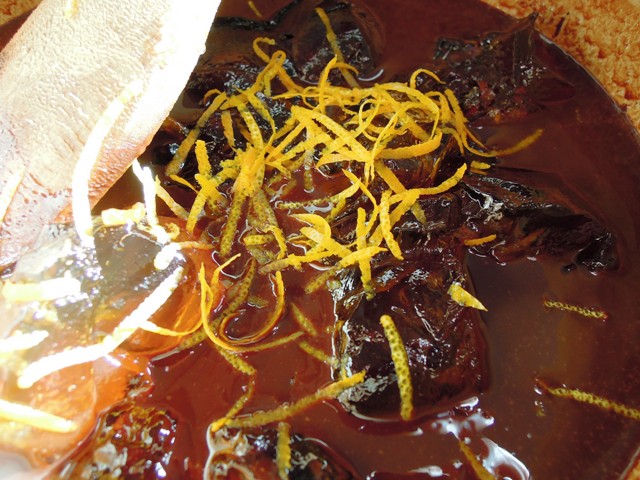 When it’s all mixed together well, stir in the flour.

Place 12 muffin paper cases into your muffin tin and spoon in the cupcake mixture. Bake in the oven for 25 minutes until the cakes have risen and are springy to the touch.

Cool in the muffin tray for 10 minutes or so, and then transfer to a wire rack until they are completely cool.

To make the icing, break up the remaining 100g chocolate into a saucepan and add the double cream. Bring to a gentle boil and then remove from the heat. Stir with a wooden spoon for a few minutes until the icing is smooth and thick. Use a tablespoon to ice the cakes and pop a few pieces of mixed peel in the middle of each one. 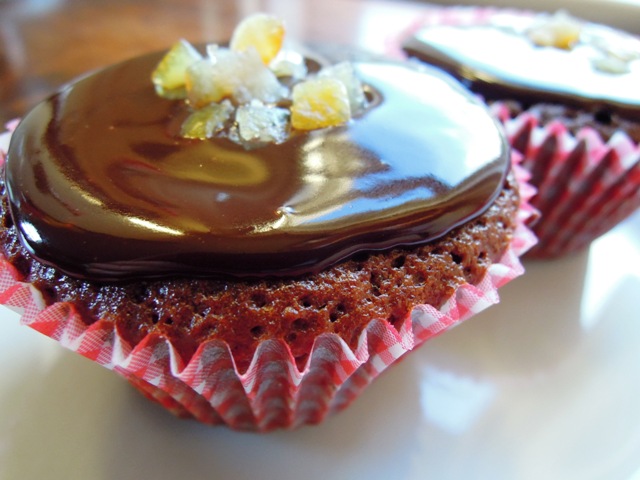 I just had a bit of a wobble and almost changed my mind about posting this recipe. Another blogger, a proper baking blogger with tonnes of followers, has just posted their recipe for chocolate orange cake. My confidence in my own food was zapped in a matter of seconds. But do you know what, I am going to press that ‘publish’ button. This isn’t a competition, after all. Is it?