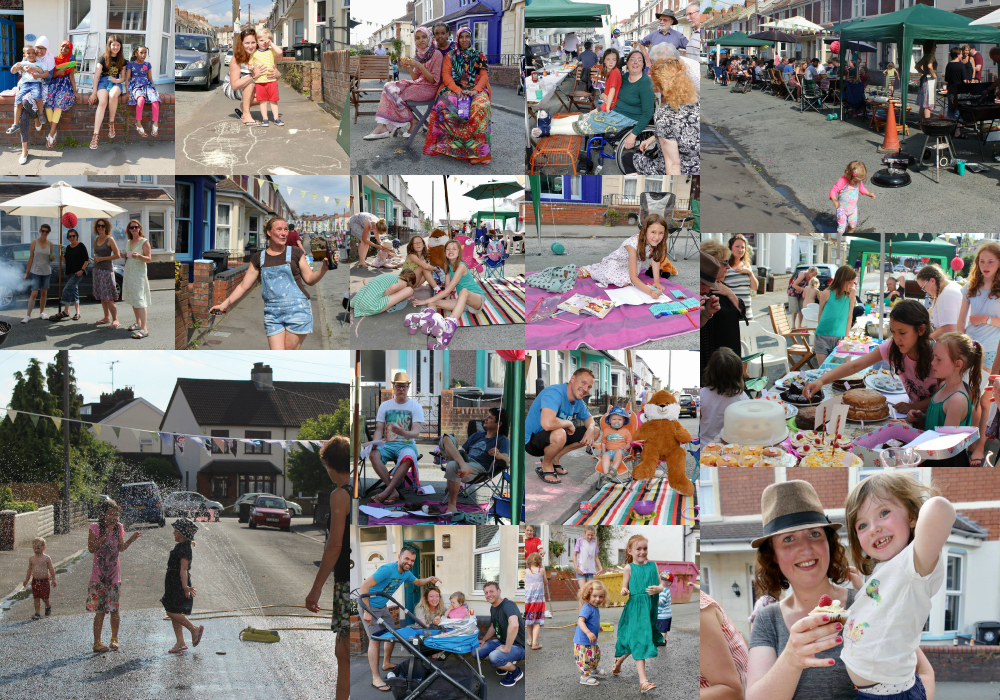 We moved into our new house in Bristol at the end of June last year, just after the annual street party. We were rather gutted about this, as it would have been an awesome way to get to know our new neighbours. Not to worry, we’ve gradually been working away around the street as a result of Halloween trick or treating, Playing Out, and the new babysitting circle. But it wasn’t until this year’s street party, last weekend, that we properly felt a genuine part of our new community.

The Foxcote Road festivities were one of a wave of street parties across Bristol and the rest of the country to celebrate community, friendship and diversity, as part of both The Great Get Together (coordinated by the Jo Cox Foundation in honour of MP Jo Cox) and The Big Lunch, organised by the Eden Project’s Communities initiative.

There was lots of sharing food and drink, music, face painting and games – including the very competitive cherry stone spitting contest. I was abysmal. I’ll be putting in some training before next year’s street party.

After maybe one-too-many ciders at the organising meeting in our local pub, I volunteered to organise the Great Foxcotian Bake Off competition. I was terrified we’d have no entries on the day, but was relieved and delighted to see 21 entries brought out into the street once the barbecue was over. There were seven delicious entries in the adult category and an impressive 14 tempting entries in the children’s category.

With prizes kindly donated by The Lounge and Toyville on North Street, the standard of entries in the first ever ‘Great Foxcotian Bake Off’ were outrageously high.

Congratulations to Cate Hiscock who won the children’s baking contest with her beautifully presented and very scrumptious chocolate brownies, and to Nicola Wolff-Donitz who beat off stiff competition in the adult’s category with her classic (third time lucky) Victoria sandwich.

Thanks to our very professional judges who did a stirling job and took their jobs extremely seriously, tasting every single cake: Heather Whiteside-Knott (from Heather’s Homemade Cakes in Southville) and Tim Burchell.

And thanks to everyone in Foxcote Road who took part and helped organise – you know how to throw a mean street party and we can’t wait til next year!