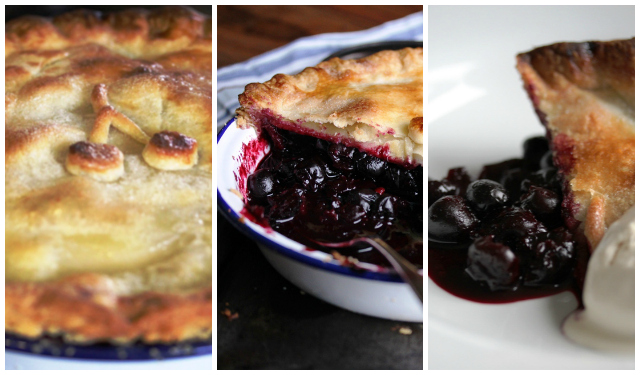 I don’t know a single person who’d turn down a big fat slice of hot cherry pie. It’s been one of my favourite pies for as long as I can remember, but this mighty fine dessert took on extra special significance when I was about 15 and became absolutely obsessed with the cult David Lynch / Mark Frost surreal murder-mystery, Twin Peaks. To this day, whenever I hear the opening bars of the ever so haunting Falling, a shiver runs down my spine.

Every Wednesday morning I’d rush to school so I could swap notes with my best friend Ruth on all the twists and turns of last night’s episode. I would have given anything for a leather jacket-clad biker boyfriend like James Hurley, was terrified if ever I entered a room with long red curtains, had recurring nightmares about Bob, and I so wanted to be Audrey Horne. I wasted much too much time trying in vain to tie cherry stems with my tongue…


And I longed to sit in an old fashioned, small town diner tucking into a good cherry pie, accompanied of course by a damn fine cup of coffee, as was the wont of our beloved federal agent Dale Cooper.

So you can imagine just how excited we were when late last year it was announced that a limited series will be aired on Showtime in 2016, set 25 years later in the present day. Almost immediately my best friend and old boyfriend (who incidentally used to call me ‘cherry pie’) had sent me links to the trailer on YouTube.


In readiness for next year’s big event, I thought I’d better perfect my cherry pie recipe. I’ve never made my own before but I reckon my first attempt was really rather good. I’m not sure how it compares to the one served up in the Double R Diner nor whether it would get Dale Cooper’s seal of approval, but my family certainly wolfed it down. It goes very well with a large scoop of vanilla ice cream on the side, not forgetting a big mug of strong, steaming hot coffee.

I used a bag of frozen black cherries but I imagine it would be even better to use fresh in the summer.

Sift the flour and salt into a large bowl and stir in the sugar. Chop the chilled butter into small cubes and add to the flour. Mix in with a round-bladed knife until the mixture looks like breadcrumbs. Add 2 to 3 tablespoons of ice water and mix in with the knife to form a dough. Use your hands to bring the dough together into a ball shape. Wrap in cling film and place in the fridge for half an hour.

Place the cherries, Marsala, corn flour and sugar in a saucepan and mix together. Heat gently until the cherries have softened slightly and the corn flour has thickened the sauce. Set aside to cool.

Take the pastry out of the fridge and cut off a third for the lid. Roll out the rest to line your pie dish. I used a shallow metal plate dish. Prick the bottom with a fork, line with baking parchment, cover with baking beans, and blind bake for 8 minutes. Remove the paper and beans and brush the pastry with a little beaten egg. Return to the oven for a couple of minutes.

Pour the cooled cherries and sauce into the pie dish and brush the rim with more beaten egg. Roll out more pastry for the lid and place carefully on top. Crimp well to seal. If you like you can use the leftover pastry to cut out some decorations. Pop these on top, and brush with more egg and sprinkle with caster sugar.

Bake in the oven for 20 to 30 minutes until the pastry is golden brown and crisp. Allow to cool for 10 minutes before serving with generous scoops of ice cream. And don’t forget the coffee.

I am entering my Cherry Pie into the March Family Foodies challenge, hosted this month by Louisa over at Eat Your Veg. The theme is Let’s Get Baking.