This recipe was first published in my Eat the Season column in the Wells Journal on 30 January 2014.

Certain dishes can magically transport you to places from your past. Whenever I eat chicken satay, for instance, I’m taken back to trips to Malaysia as a child, visiting my mother’s family. And whenever I eat buttery poulet a l’estragon, I’m straight back to France and the first time my father-in-law cooked for me and I discovered Elizabeth David.

This tasty pizza is another dish that takes me back to France. But it’s not to the snowy French Alps I go, which is where Tartiflette originates. It is to St Émilion; where I sat with my family last summer in a touristy pavement cafe in the blazing August heat, and where I first tried this rather different take on the classic French cheese and potato bake.

I promised myself then that I would make the pizza on my return home. It’s only taken me five months. But actually, I think this pizza is probably suited to the winter months. It is rich and creamy, and can definitely be classed as an indulgent comfort food with its topping of delicious Reblochon, the French mountain cheese from the Savoie region.

My recreation back at home worked well. I wasn’t 100% sure the children would cope with the cheese as it does have a rather strong taste, but they gobbled it down greedily. Potato may sound an odd topping for a pizza and this is certainly not a light pizza, but it is just so good with the oozy cheese and caramelised onion, making for a very satisfying meal.

For the Tartiflette topping:

To make the dough, put the flour, salt, dried yeast and oregano into a large mixing bowl and mix well.

Make a well in the middle and pour in the lukewarm water and oil. Gradually work the flour into the liquid, making a soft dough. If it’s too dry, add a drop more water. If it’s too sticky, add a little more flour.

Flour your surface before tipping the dough onto it. Knead the dough by stretching it away from you, then pulling back into a ball. Do this for five minutes or so, until the dough is smooth and elastic.

Return the dough to the mixing bowl, cover loosely with cling film and put in a warm place for about an hour, until the dough has doubled in size.

While you are waiting for the dough to prove, gently fry the lardons until they release some fat. Add the sliced onion and continue to fry gently until the onion is soft. Stir in the crushed garlic.

Uncover the risen dough and punch it back down. Flour the surface again and divide the dough into four balls. Stretch or roll out each ball until you have a thin circle about 22cm across. Place the pizzas onto baking sheets, lightly dusted with semolina.

Thinly slice the cooked potato and arrange on the pizza bases. Scatter over the lardons, onion and garlic and sprinkle with the oregano. Thinly slice the Reblochon and lay on top. Finally drizzle each pizza with cream.

Bake in the oven for around 10 minutes, until the topping is golden and the pizzas are crispy. Serve at once with a crisp green salad. 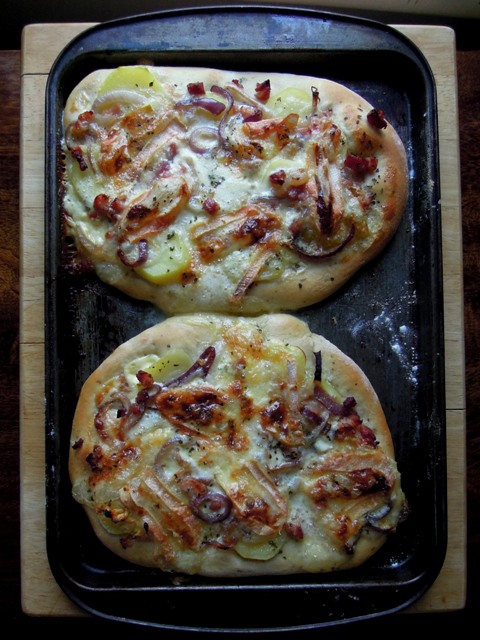 Admittedly pizza isn’t one of the most sophisticated dishes ever created, but in my eyes Reblochon cheese is one of the sexiest foods I know. And sexy foods in my eyes equal romantic foods. So I’m entering my Tartiflette Pizza into February’s Cheese, Please! challenge over at Fromage Homage where the theme this month is Cheesy Romance. This pizza would definitely get me in the mood for love…