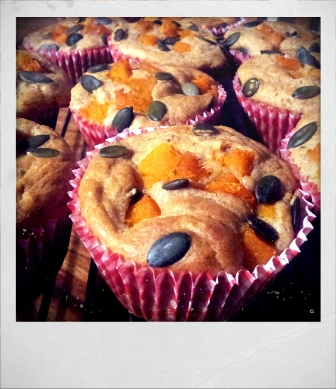 A rather large butternut squash arrived in our veg box last week. So as well as making my usual soup, I thought I’d try out a couple of new recipes on the family.

The first of these was a Lorraine Pascale recipe I’d seen her do recently on TV – pumpkin and rosemary muffins.

It’s a great recipe, ever so easy, and would definitely recommend you try it. My husband and I enjoyed the muffins one lunchtime. We had them warm, with a little butter and some mature Cheddar cheese on the side.

Unfortunately our daughters were  not so impressed to find them in their lunch boxes at school and nursery. I think perhaps the rosemary was too overwhelming a flavour for them. Oh well, you can’t win them all, but you’ve got to try!

So I put the remainder in the freezer and I look forward to enjoying them at some point, sans enfants.

I won’t write out the recipe for pumpkin and rosemary muffins here but instead direct you to the BBC Food website.

The muffins used about a quarter of the butternut squash. I took another quarter for a squash risotto as inspired by the lovely people at Riverford Organic, who deliver our weekly veg box.

Now this was a success with the whole family, almost. The kids really enjoyed it, wolfing it down in seconds. It’s easy to eat, so very good for toddlers and babies getting to grip with new textures. My husband did quite like it I think, despite a few comments about the lack of meat. Which is normal from him.

This is another simple recipe. I only used half the quantities given in the Riverford recipe and I still had enough to feed two adults and two children, with a couple of portions left over for the freezer.

With the remaining half of the squash I cooked up a big pan of soup. Butternut squash makes for a very satisfying soup and children in particular love it, probably because they’re rather partial to those sweet flavours.

I usually boil the butternut squash with the potato but this time it had already been roasted, as I’d needed cooked squash for the other recipes. I think I prefer it this way. It gives the soup a slightly more smokey flavour which is delicious. 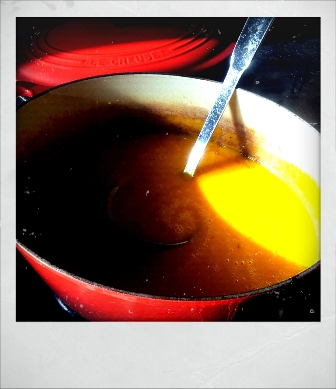 Heat the oil in a large pan and add the onion. Gently fry until golden.

Add the squash and potato and cook for a minute or two before pouring in the hot stock.

Bring to a gentle simmer, then cover and cook for 15 minutes.

Liquidise the soup until smooth using a handheld blender or in a jug liquidiser. Season to taste with salt and pepper.

As butternut squash is in season right now and in plentiful supply, I’ve entered this post into the Simple and in Season blog event for February over at Fabulicious Food.

I love the idea behind this blog event – highlighting the best of what’s in season now and sharing recipes using those wonderful ingredients.

Some gorgeous looking recipes have already been posted, and I look forward to seeing many more over the coming month.

If you’ve got a recipe using seasonal ingredients, you should check it out!